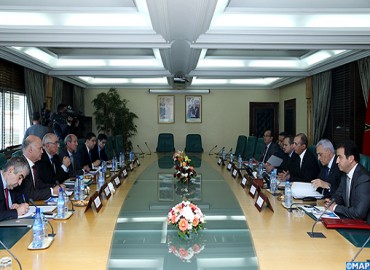 The prefectural and provincial committees in charge of examining illegal migrants’ requests for regularization composed of representatives of local authorities and civil society associations, the National Commission in charge of Illegal Immigrants’ Regularization said Wednesday in a statement following a meeting at the Interior Ministry.

A monitoring and appeals Committee, chaired by the national human rights council (CNDH),  set up to review applications rejected by the prefectural and provincial committees “in order to optimize the regularization process and increase the number of beneficiaries,” the commission added.

During its meeting, the commission “formulated the modalities for the launching and the implementation of the regularization campaign’s second phase in the framework of a humanistic approach that respects human rights and protects vulnerable groups,” the source pointed out.

This second phase will capitalize on the success and achievements of the previous operation initiated in 2014 “by applying the same reasonable and equitable eligibility criteria that have been adopted and which will make it possible to regularize the largest number of migrants in accordance with a solidary and inclusive migration policy”, the commission noted.

In accordance with the high instructions of HM King Mohammed VI, the second phase of the campaign for the regularization of the situation of illegal immigrants in Morocco will be launched immediately, as already planned for the end of 2016.

During HM the King’s visits to sub-Saharan African countries, several Heads of State congratulated the Sovereign and the Kingdom of Morocco for its migration policy, which aims at promoting the economic and social integration of illegal immigrants mainly those from Sub-Saharan African countries, the National Commission in charge of Illegal Immigrants’ Regularization said on Monday.