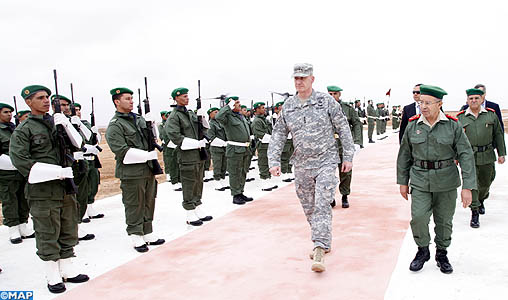 US military delegation Arrived at Cape Draa for “African Lion 2015”

Tan Tan – A US military high-ranking delegation, led by General David Rodriguez, head of command of US Africa Command (Africom) has made Thursday at the maneuver site Cap Draa, on the margins of maneuvers of the Moroccan-US exercise “African Lion 2015”.

He arrived in the maneuver site Cap Draa, the US delegation, which also includes General Frank Gorenc, chief of command of US Air Forces in Africa and Europe, was received by several senior military officials of the Armed Forces Royales (FAR).

The Moroccan-US exercise “African Lion-2015” set the key objectives, in particular to strengthen bilateral military cooperation and the exchange of know-how and expertise between the FAR and the US Army.

This exercise, held annually and consists of various activities including, in particular, shooting, tactical maneuvers, civil-military operations (CIMIC) and of the peacekeeping operations exercises, was marked by the participation of ‘African and European observers.

as regards civil-military operations (CIMIC), medical and dental benefits are delivered to local populations in areas of Tiznit and Sidi Ifni by medical teams of doctors and nurses FAR and the US military.