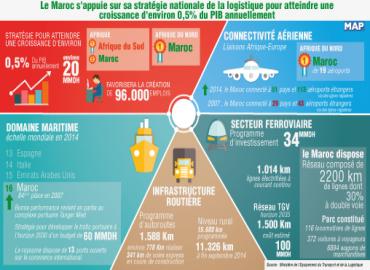 Morocco relies on a national logistics strategy to achieve a growth of 0.5% of the Gross Domestic product (GDP) yearly, which equals 20 billion dirhams.

This strategy, which will generate 96,000 jobs, helped Morocco rank first in north Africa and second after south Africa in the continent, said a document by the equipment, transportation and logistics ministry.

This good performance is partially due to the Tangiers Med port complex. In fact, before this huge infrastructure become operational in 2007, Morocco ranked 84th in maritime connectivity which measures the regular transportation network and the country’s integration in world’s trade.

Morocco also possesses 12 other ports open on international trade, notably the Casablanca port, and has developed a strategy by 2030 worth 60 billion MAD in order to develop its port traffic.

Regarding air connectivity, Morocco has become a leader in north Africa in the market of Africa-Europe air routes which it runs along with Air France. The share of Africa traffic in Morocco’s carrier RAM is 25% of its total activities, said the document.

As for air infrastructure, Morocco has 18 airports including the Mohammed V airport which holds the majority of international air traffic. In 2014, Morocco was connected to 51 countries and 113 foreign airports via regular air routes against 29 countries and 43 airports in 2003.

Concerning railways, Morocco has a 2200 km-network comprising 30% of double track lines and 1,014 of electrified lines, while the Kingdom is forging ahead with its road infrastructure through its 1,588 km highway program.