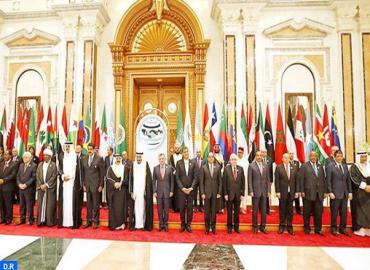 HM King Mohammed VI expressed the hope that the “Riyadh Declaration”, to be adopted by the 4th Arab World-Latin America summit held in the Saudi capital on November 11, will support action conducive to developing “multi-dimensional partnership” between the two groupings.

“I look forward to the ‘Riyadh Declaration’ to be adopted by this Summit, hoping it will support our action to develop a multi-dimensional partnership founded on a pragmatic approach that takes into account our countries’ capacities as well as their resources, priorities and pace of development, in addition to the changes unfolding in the world today, particularly in the areas of finance, business and technology”, said the Sovereign in a message read out by head of government, Abdelilah Benkirane.

HM the King added that the Declaration should “call on institutional, government and private economic operators to be more actively involved in order to improve the investment environment, create wealth and provide jobs”, noting that multi-dimensional partnership between the two groupings should also cater for “countries’ capacities as well as their resources, priorities and pace of development, in addition to the changes unfolding in the world today”.

HM the king further highlighted the importance of human development, calling for “the preparation and implementation of social projects that have a direct impact on the citizens’ lives”.

After hoping that the forum will help strengthen effective, solidarity-based South-South cooperation and address the development and security challenges, the Sovereign expressed appreciation for “the positions of South American countries in support of Arab just causes, particularly that of Palestine”.

“Indeed, South American countries were among the first to defend Palestine’s right to obtain a non-member observer state status at the United Nations Organization”, HM the King recalled.

“As Chairman of the Organization of Islamic Cooperation’s Al-Quds Committee, I shall continue my untiring efforts to support the Palestinian people’s right to establish their independent state on the 1967 borders, with East Jerusalem as its capital”, the Sovereign pledged, urging the Middle East peace process sponsors to carry on efforts to compel Israel to return to the negotiating table, “on the basis of a credible negotiation program with a clear, specific timetable for the achievement of the two-state solution, as provided for by the resolutions of international legitimacy and by the Arab Peace Initiative.”

“Given the rapid changes and major challenges in the Arab region, I call for concerted efforts to find lasting solutions to conflicts in some Arab countries”, went on HM the King who voiced support to the “initiative taken by the Custodian of the Two Holy Mosques to restore legitimate rule in Yemen.”

The Sovereign also affirmed support to “all initiatives aimed at resolving the crisis in Syria, putting an end to bloodletting in that country, alleviating the suffering of the Syrian people and fulfilling their aspirations for freedom, security and stability.”

Regarding the situation in Libya, HM the King called “for a solution to the crisis in Libya through dialogue involving all components of the Libyan people. This is a goal Morocco has been trying to achieve by hosting the Libyan parties’ negotiations in Skhirat.”

The Sovereign also warned against “the alarming increase in the number of radical and terrorist groups” which seek to disrupt global security and stability, undermine the territorial integrity of states, kill innocent people, destroy economic infrastructure and annihilate artefacts and symbols of human civilization “, insisting that this “requires resolute, collective action on the part of the international community as well as greater military and security coordination and cooperation”.

For the Sovereign, the most daunting challenges facing countries of the two regions include the need to respect the territorial integrity of states and to uphold human and moral values grounded in moderation and in the promotion of human rights, fundamental freedoms and the rule of law.

The declaration reaffirmed the pressing need to avoid any measure that could impact the authenticity and integrity of the cultural, historical and religious heritage of the holy city as well as of the holy Muslim and Christian sites out there, pursuant to the Convention concerning the Protection of the World’s Cultural and Natural Heritage (1972) and the Convention for the Protection of Cultural Property in the Event of Armed Conflict adopted at The Hague (Netherlands) in 1954.

The document expressed esteem for efforts made by Morocco to facilitate the process of reaching the Skhirate agreement related to a political solution to the Libyan crisis.

The participants voiced, on this occasion, their support for institutions of the UN-recognized Libyan legitimate government in its military and security efforts to fight terrorist groups.

The declaration also lauded the unanimous election of Morocco to co-chair with the Netherlands the Global Counterterrorism Forum.

Why the Western Sahara Matters