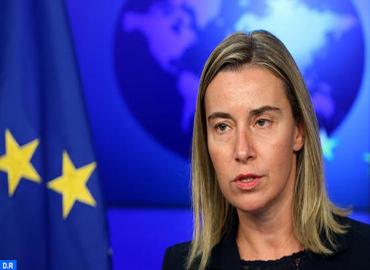 The EU will take no action that would hamper the UN process under way to settle the Sahara issue, said High Representative of the European Union for Foreign Affairs and Security Policy Federica Mogherini.

Answering a question by Spanish Euro-deputy Josu Juaristi Abaunz who called upon the EU to appoint an expert to supervise human rights in the Sahara and urge the UN to broaden MINURSO mandate to include human rights, Mogherini said that the EU supports UN’s efforts to reach a just, lasting and mutually-acceptable political solution to this conflict and cannot take any action that would hamper this process.

Mogherini voiced concern over the persistence of this regional conflict and its impact on the region’s security and integration and said that the EU refuses to meddle in the process of settling this issue which remains within the UN competence.

She recalled that the UNSC had extended the MINURSO mandate until April 2016, insisting on the fact that any action outside the UN framework would weaken efforts by the international community seeking to find a solution to the dispute.

Explosives Detectors Will be Installed at Mohammed V Airport