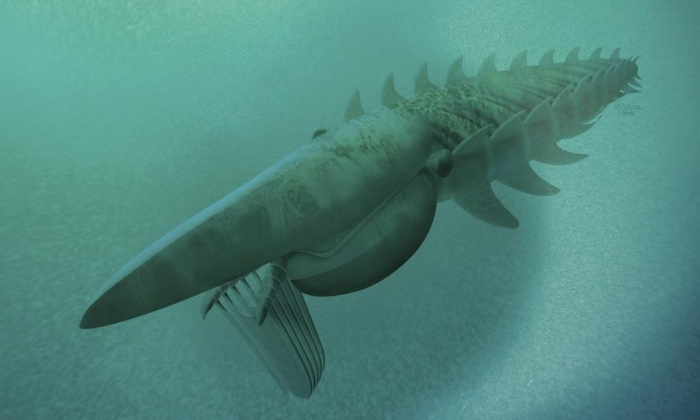 A filter-feeding “lobster” as big as a human took the place of whales 480 million years ago, a new fossil discovery has shown.

The two-metre prehistoric creature, whose remains were unearthed in Morocco, belonged to the family of anomalocaridids, the early ancestors of modern crustaceans, insects and spiders.

But while most of its relatives were shark-like predators with circular mouths and sharp teeth, the new species, named Aegirocassis benmoulae, was a gentle giant.

Like the modern whale, it filtered seawater to trap tiny particles of food, using spine-covered “limbs” on its head. It is thought to be the oldest giant filter-feeder ever discovered.

Dr Allison Daley, of Oxford University, who co-led a team writing in the science journal Nature, said: “This would have been one of the largest animals alive at the time.

“These animals are filling an ecological role that hadn’t previously been filled by any other animal. While filter-feeding is probably one of the oldest ways for animals to find food, previous filter-feeders were smaller, and usually attached to the sea-floor. We have found the oldest example of gigantism in a freely swimming filter-feeder.”

Aegirocassis benmoulae was named after the Moroccan fossil hunter who discovered it, Mohamed Ben Moula.

The three-dimensional fossil, exposed using tiny needle-like tools to chip away the surrounding rock, is exceptionally well preserved. Many other anomalocaridid fossils have been flat, like pressed leaves.

“Without these 3D remains, we may never have got the insight into these animals’ anatomy that we did,” said Daley.

The fossil shows that Aegirocassis had pairs of swimming flaps along its body, which were likely to be precursors of the unique double-branched appendages seen in modern crustaceans.

A 2015 Breakthrough? The Limits of Shuttle Diplomacy with the Polisario