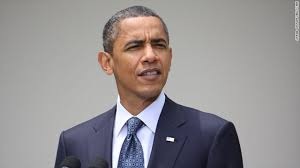 Barack Obama: The fight against terrorism is not a religious war

The fight against terrorism is not at war against radical Islam or a religious war, stressed on Sunday US President Barack Obama, insisting that such qualifications begin efforts to root out radical ideologies in communities Muslim.

“I reject the notion that the action of certain items that have distorted Islam has sparked a religious war because the overwhelming majority of Muslims refutes this interpretation of Islam,” Obama said in an interview with the American channel CNN information.

Obama estimated that in order to win the war against terrorism, it is necessary “to side with 99.9 pc of Muslims who seek to accomplish the same goals to which we aspire, namely order, peace and prosperity. ”

The US head of state stressed that it would be against-productive in this struggle not to take into account the fact that the overwhelming majority of Muslims reject the ideology of violence and nihilism.

“I do not want to go in the game labels, but I think it is a particular problem that has its roots in the Muslim community,” Obama said, adding that the Middle East and south Asia is the starting point for winning hearts and minds, especially among young people. Argentina President: “Morocco is a fascinating country with an exquisite cultural identity”