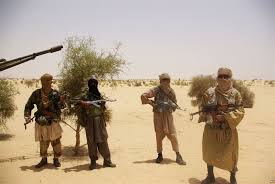 Morocco on Saturday released a statement on the ongoing anti-terrorist operations, in close cooperation with security bodies in Spain, France and USA, which led to the arrest of Djihadists who hired young activists in the enclave of Melilla in order to serve three Al-Qaeda groups.

Spanish Intelligence of General Police Directorate and Moroccan security forces joined efforts to dismantle a terrorist network of seven people who happen to return from areas of conflict such as Syria.The network hired online members to serve the Islamic State of Iraq and Syria “ISIS”, Jabhat Annousra “JN” and Al Qaeda in the Islamic Maghreb “AQIM”

This operation was marked by arresting the focal point of the network called Mustafa Maya Amaya; a Spanish citizen who lives in Melilla and who was arrested during a meeting with two French citizens that were supposed to join the Djihadists in Syria…

The network had subdivisions in Morocco, Belgium, France, Tunisia, Turkey, Libya, Mali, Indonesia, Syria and many other countries.

The members of the terrorist network received a strong shock by arresting leaders and logisticians and also by halting the process of sending Djihadists to Syria.

The General police directorate accomplished this operation with the support of the Federal Bureau of Investigation of the United States, the Spanish National Intelligence Center and Moroccan staff.