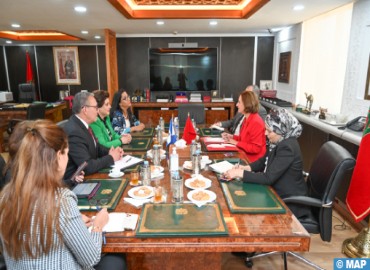 The Minister of Tourism, Handicrafts and Social Economy, Fatim-Zahra Ammor discussed Thursday in Rabat, with the Deputy Minister of Foreign Affairs of Guatemala, Ava Atzum Arévalo de Moscoso, opportunities to strengthen cooperation between the two countries.

This meeting has confirmed the good political, economic and cultural relations and exchange on opportunities for cooperation to seize, especially in the field of crafts, given the great diversity and richness of handicrafts Moroccan and Guatemalan.

It will also be a good start for the launch of a partnership framework in the field of crafts, and will open wide prospects for fruitful collaboration between the two countries, through the signing, soon, a bilateral cooperation agreement, which will give rise to the organization of several exhibitions, in line with the objective of promoting the richness of our heritage crafts, according to the Ministry of Tourism, Handicrafts and Social Economy and solidarity.

As part of the exemplary relations between Morocco and Guatemala, this meeting comes after the participation of Ms. Ammor in the celebration of the 201st anniversary of the independence of Guatemala organized by the Guatemalan Embassy in Rabat.

This celebration was an opportunity to consolidate the positive dynamics of bilateral cooperation between Morocco and Guatemala, and to convey a strong message to the Guatemalan side on the particular importance for the Kingdom to strengthen bilateral relations between the two countries.

The meeting was also attended by the Director General of the Ministry of Foreign Affairs of Guatemala, Maria Luisa Ramirez Coronado and the Ambassador of Guatemala in Rabat, Erick Estuardo Escobedo Ayala.