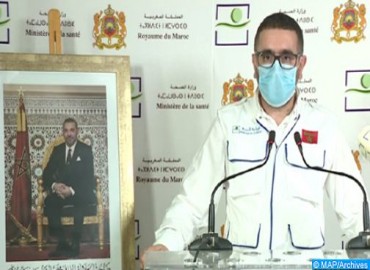 One hundred and thirty-five (135) new cases of infection with the coronavirus (Covid-19) and 85 recoveries have been recorded in Morocco during the last 24 hours, announced on Tuesday the Ministry of Health.

This new figure brings to 8,437 the number of contaminations in the Kingdom since the declaration of the first case on March 2 and to 7,493 the number of people who fully recovered, said Dr Mouad Mrabet, coordinator of the National Center for Public Health Emergency Operations at the ministry of health, in a statement aired by MAP on its television channel M24 and on RIM RADIO.

Two new deaths have been recorded, bringing the death toll to 210, he said, adding that the fatality rate remains at 2.5%, while the recovery rate is 88.8%.

The ministry invites citizens to respect the rules of hygiene and health security as well as the preventive measures taken by the authorities, by showing responsibility and patriotism.