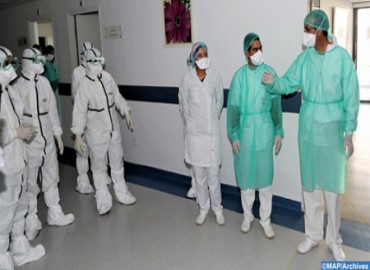 The number of coronavirus active cases treated at the various Moroccan hospitals stands at 652, i.e. a rate of 1.8 per 100,000 inhabitants, the Ministry of Health announced on Sunday.

The average age of active cases is 33 years and 58% of these cases are male and 42% female, said coordinator of the National Center for Emergency Operations at the Ministry of Health, Mouad Mrabet, in a statement broadcast by MAP on its M24 TV channel and Rim radio.

The majority of these cases are in the regions of Casablanca-Settat (278 cases), Tangier-Tetouan-Al Hoceima (136) and Marrakech-Safi (127), he said, adding that there are no active cases in the regions of Draa-Tafilalet and Dakhla-Oued Eddahab.

Dr Mrabet noted that 25 of the new confirmed cases were reported in the region of Rabat-Salé-Kenitra, 15 in the region of Marrakech-Safi, 13 in Tangier-Tetouan-Al Hoceima, 7 in Casablanca-Settat, 7 in Fez-Meknes, 5 in Beni Mellal-Khenifra and one case in Souss-Massa.

No new coronavirus-related death was reported over the past 24 hours and the death toll remains at 208, he added, noting that the mortality rate has slighltly dropped to 2.5%.

A total of 49 Covid-19 patients have recovered over the given period, which rises the total of recoveries to 7,364, the official said, noting that the recovery rate stands at 89.5%.

According to him, 68 cases out of the new confirmed cases (93%) were detected through contact tracing.

Dr Mrabet said the number of people who had contact with confirmed COVID-19 cases has reached 48,775 since the start of the outbreak, including 7,249 who are still under medical monitoring.

He stressed that serious or critical cases represent 2.5% of the total of cases, adding that 16 COVID-19 patients in critical case are treated at the intensive care units, including 4 who are put on artificial respiration