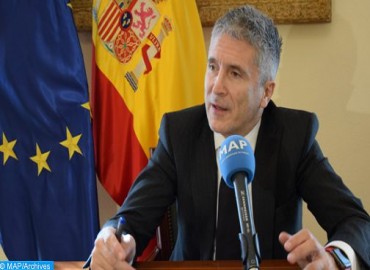 Relations of cooperation between Spain and Morocco are “very close and very important,” Spanish Interior Minister Fernando Grande-Marlaska has said.

“I reiterate that relations with Morocco are excellent, important and remarkable. I would say that everything can be improved, but relations are very close and very important,” said Grand:e-Marlaska before the Interior Commission at the Spanish Senate.

Regarding the fight against illegal immigration, Grande-Marlaska, who highlighted the main outlines of his department’s policy in this area, said that he has made several trips to Morocco and held meetings with Moroccan officials as part of bilateral cooperation.

He also stressed the importance of the role of the EU in these efforts.

Thanks to collaboration with Morocco and other partner countries, “we are saving lives every day. It is our duty,” said the Spanish minister.

The number of illegal migrants arriving by sea to Spain fell by more than 21% by the end of April, compared to the same period in 2019, according to figures from the Spanish Interior Ministry.