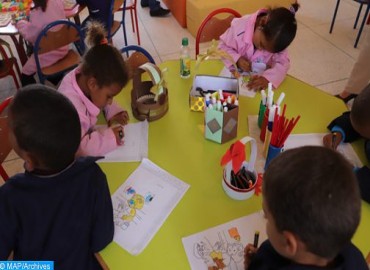 The ministry of National Education, Vocational Training, Higher Education and Scientific Research said that it continues its efforts to implement the National Pact for Children by 2030, on the occasion of the National Children’s Day.

The celebration of this Day on 25 May each year, decided by the late HM Hassan II in his message to the participants in the 1st National Congress on the rights of the child, held in May 1994, is an opportunity to reiterate the commitment of the Kingdom, under the leadership of HM King Mohammed VI, to promote the conditions of children, their status and their rights in society, said the ministry of National Education, Vocational Training, Higher Education and Scientific Research in a statement.

The ministry affirmed that child welfare receives special attention from HM King Mohammed VI, highlighting the importance which the Sovereign attaches to child welfare as an integral part of the Kingdom’s overall development, while emphasizing that HRH Princess Lalla Meryem chairs the Children’s Parliament.

Morocco has also launched several major projects for the promotion and protection of the rights of children and the strengthening of their status in society at all levels, according to the same source.

In this regard, the ministry was associated with the “National Pact for the Child” signed on the sidelines of the 16th National Congress on the rights of the child (Marrakech, 20-23 November), under the effective chairmanship of HRH Princess Lalla Meryem, chairwoman of the National Observatory of the Child’s Rights (ONDE).

In addition, the ministry highlighted Framework Act No. 51.17 on the system of education, teaching, training and scientific research as a road map for ensuring equitable and quality education for all pupils and students in general and for children in particular.

With regard to the child’s right to schooling, the ministry has worked to generalize primary education, with an enrolment rate of over 99.7 per cent.

The Education department also reviewed the national program of inclusive education for children with disabilities, launched in June 2019, noting that in the first year of its implementation, nearly 100,000 students with disabilities enrolled and benefited from school timetable adjustments and pedagogical, medical, paramedical and social support services.