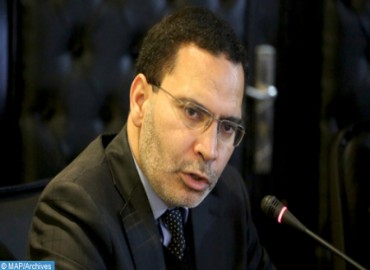 The defense in the United States of secession in the Moroccan Sahara reveals the hidden face of regional conflicts’ merchants whom are not interested in resolving them but in nourishing and perpetuating them as a source of mercenary practices, said former minister and former government spokesperson Mustapha El Khalfi.

In an analysis published in the Friday issue of the weekly paper “Challenge”, El Khalfi discussed an article published on August 10, 2019 by David Keene in the American magazine “The American Spectator”, entitled “Africa’s Last Colony”, noting that this article, which defends in the United States the secession of the Moroccan Sahara for a subsidy of 30,000 dollars per month from the Algerian state, denounces a corrupt journalist serving the project of dividing Morocco.

“We are faced with a tangible incident which denounces a corrupt journalist serving the project of dividing Morocco while proclaiming slogans of self-determination, and with explicit funding from the Algerian government,” said El Khalfi, recalling that the article was then posted on the website of the Ministry of Justice concerning data from lobbying companies concerning their actions for foreign countries.

In this article, David Keene pleads for the separatist proposal, presenting the Moroccan Sahara as the last colony in Africa, and uses his allegations in defending his friend John Bolton, the former national security adviser in the Trump administration, and his efforts in favor of secession, said El Khalfi.

It is in fact an article full of untruths, of which we choose the one that exposes the ignorance of its author and his bias, noted El Khalfi, pointing out that he wrote that the Baker Plan that Morocco rejected was in 1997 while it was in 2003.

“In addition to the blatant bias to Algeria and the Polisario by completely ignoring Baker’s first resolution in 2001 which Morocco accepted and which was rejected by Algeria and the separatists. Keene only mentioned what Morocco refused to present it as responsible for the failure of the UN project for the settlement of the conflict,” he wrote.

As for defending Bolton, it is about ressuscitating the position of the latter in his speech to the Heritage Foundation, in which he announced a tendency to put pressure on the United Nations to remedy the failure of MINURSO to organize the referendum and accelerate the resolution of the conflict, which he interpreted as an attempt at revolt against the international tendency to find a political solution adopted since 2001 as an alternative to the old referendum plan which failed because of the inability of the United Nations to set the voters’ list, according to the report of the UN Secretary-General to the Security Council in May 2001, which he confirmed in the 2003 report, affirmed El Khalfi.

He pointed out that despite the article published in the influential Republican magazine, Bolton was removed from office by President Donald Trump one month after the article was published, stressing that his departure was considered a dark day for the separatist thesis.

He recalled, in this regard, that when Bolton was appointed national security adviser in April 2018, he directly influenced the decision of the Security Council on the Moroccan Sahara issue to adopt a period of six months for discussion instead of a period of a year, as a means of putting pressure on Morocco.

French Lawyer: Moroccanness of Sahara is Confirmed in Fact and in Law