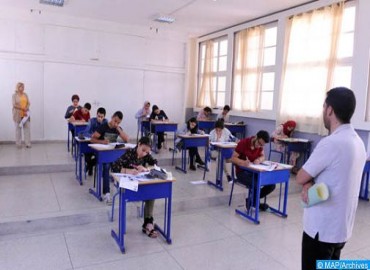 The ordinary session of the unified national exam for the Baccalaureate 2020 will take place in two phases, on July 03-04 for Literature and traditional education and on July 06-08 for technical sciences and vocational baccalaureate, announced on Monday the Minister of National Education, Vocational Training, Higher Education and Scientific Research, government spokesperson Said Amzazi.

In response to a question during the oral questions’ session at the House of Representatives, the Minister stressed that the topics of the exams should be limited to courses given in person before the suspension of studies, in order to respect the principle of equal opportunities.

He explained that a frame of reference will be published to specify the subjects on which the candidates will be examined, noting that the results of this session will be announced on July 15.

The catch-up session will take place from July 22 to 24 for all branches combined, while the final results will be announced by July 29, 2020, said the minister.

As for the unified regional exam for the first year of the baccalaureate, it is scheduled for September 4-5, 2020, he said, noting that the subjects of the exams will be based on in person courses until the date when classes were suspended.

As for other school levels, Amzazi said that only the marks of tests organized until March 14th will be taken into account, as well as the marks of local examinations for the 6th year of elementary school and the 3rd year of middle school.