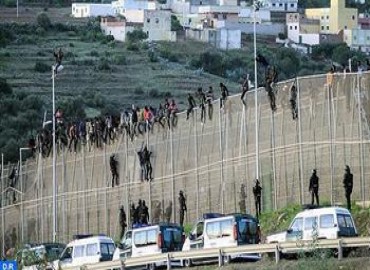 A mass illegal immigration attempt, by 800 Sub-Saharan nationals, to storm into the occupied city of Sebta took place on Sunday, the interior ministry said in a statement.

Illegal immigration attempts, which run counter laws in force in Morocco, put their perpetrators outside the law and expose them to legal proceedings, said the ministry, adding that “from now on, the authors of such attempts will be brought to justice which will deliver verdicts ranging from expulsion out of the Moroccan territory to more severe sentences depending on how serious their acts are”.

Given these ill-considered acts, it is worth recalling that Morocco, pursuant to HM King Mohammed VI’s instructions, has resolutely committed itself to regularizing the situation of immigrants in Morocco and helping them enjoy the same rights as Moroccan nationals’, it added.