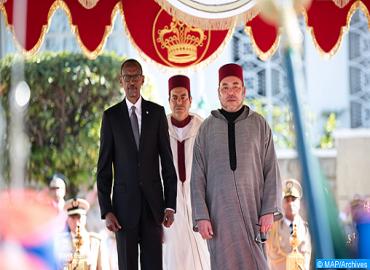 The agreements, which concern the different sectors as agriculture, housing, vocational training, finances, taxes and banking sector, new technologies, air transportation, tourism and renewable energy, seek to foster the legal framework governing bilateral cooperation. They are in line with the royal will to reinforce South-South partnership.

A memorandum of understanding to establish a mechanism for political consultations, inked by Salaheddine Mezouar and Louise Mushikiwabo.

An agreement on air services, signed by Salaheddine Mezouar and Louise Mushikiwabo.

An agreement on visa exemption for holders of diplomatic, service or special passports, signed by Salaheddine Mezouar and Louise Mushikiwabo.

An agreement on the promotion and reciprocal protection of investment, inked by Mohamed Boussaid and CEO of Rwanda Development Board (RDB) and member of the Rwandan government Francis Gatare.

A partnership agreement between the Moroccan tourism office (ONMT) and the Rwandan Development Board, signed by ONMT director general Abderrafie Zouiten and Francis Gatare.

A memorandum of understanding on cooperation between Casablanca Finance City Authority (CFCA) and the RDB to reinforce and develop their shared interests, signed by director general of CFCA, Said Ibrahimi and Francis Gatare.

A memorandum of understanding on the establishment of the African Institute for Technology, inked by director general of the national company for transportation and logistics (SNTL) Mohamed Ben Ouda and Francis Gatare.

A memorandum of understanding to establish a partnership for the development and promotion of an economic zone in Rwanda, inked by Mohamed Ben Ouda and Francis Gatare.

An agreement on the establishment of a Moroccan-Rwandan Business Council between the Moroccan Employers’ Association CGEM and the Rwandan Private Sector Federation (PSF), signed by president of CGEM Miriem Bensalah-Chaqroun and PSF president Benjamin Gasamagera.

A memorandum of understanding to finance the project of building 5,000 economic houses in Kigali (Ndera commune), signed on the Moroccan side by CEO of “Palmeraie Développement” Hicham Berrada Sounni and Othman Benjelloun, and on the Rwandan side by director general of the Development Bank of Rwanda Alex Kanyankole.

A memorandum of understanding to promote and secure investment and foreign exchanges by Attijariwafa-Bank, inked by Mohamed El Kettani and Philbert Afrika.

The signing ceremony was attended by members of the official delegation accompanying HM the King, members of the Rwandan government and economic operators from the two countries.