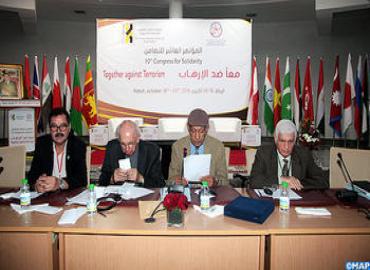 The Afro-Asian People’s Solidarity Organization (AAPSO) expressed, here Thursday, its support for the territorial integrity of Morocco and the kingdom’s approach to recover its role and its place within the African Union.

In a final statement at the end of its 10th congress, which took place on October 19-20 in Rabat, under the theme “Together against Terrorism”, AAPSO expressed its support for the peaceful solution to the Moroccan Sahara in the context of the autonomy initiative presented by the Kingdom.

AAPSO also voiced its support for Morocco’s request and its approach to recover its role and its place within the African Union, as a founder country of the African unionist framework, proud of its African roots economically, culturally and politically, the statement added.

This congress, which was attended by delegations from several countries, tackled several issues related to the Organization, as well as the means to face terrorism in any place and in all its forms, especially in Asia and Africa.

The Afro-Asian People’s Solidarity Organisation (AAPSO) is an international non-governmental organization dedicated to the ideals of national liberation and Third World solidarity.