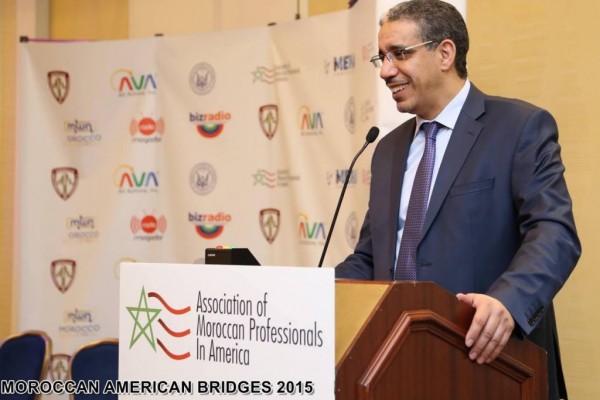 Aziz Rabbah, Morocco’s Minister of Equipment, Transport, and Logistics, delivered a keynote speech at the 2015 Moroccan American Bridges conference organized by the Association of Moroccan Professionals in America (AMPA) on December 4 in Washington, D.C.

Entitled “Educating Business for the 21st Century,” AMPA’s flagship conference featured substantive panels addressing education and entrepreneurship, energy water and infrastructure, and the intersection of those areas with business opportunities.

The conference included an expo featuring products made by Moroccan women’s cooperatives presented by the Association d’Enfant dans les Hautes Montagnes, a Moroccan non-profit organization dedicating to improving the lives of rural children in the mountains.

Minister Rabbah highlighted the current institutional reforms underway in Morocco that will promote investment opportunities in the Kingdom. “Morocco, under the leadership of His Majesty King Mohammed VI, has embarked on a process of structural reforms, which has firmly placed the Kingdom on the path of development and progress,” he said.

Minister Rabbah stressed the need for an effective link between education, entrepreneurship, and empowerment and proposed the creation of a Free Logistics Zone dedicated to American companies in Morocco. “Morocco possesses all the ingredients to become a free zone thanks to its strategic geographic location, its stability, as well as the incentives, clear direction, and transparent roadmap it offers to investors.”

Chaouki Zahzah, President of AMPA, highlighted the importance of such a conference as it provides a platform for creating business opportunities on both sides of the Atlantic and help keep the Moroccan professional community in America engaged to help bringing investments in all sectors in Morocco especially as the relations between Morocco and the United States continue to strengthen and gain power and intensity.

Over 85 people attended the MAB 2015 conference including business people, entrepreneurs, academics, lawyers, doctors, artists, university students studying Arabic, and even Peace Corp volunteers who had served in Morocco. The new AMPA Women’s Entrepreneur Network (AWEN) was announced along with several new initiatives that are underway, including the first one on January 14, 2016.

The event was co-sponsored by the Middle East and North Africa Consultants Association, with the support of strategic partners, the American University of Leadership AmCham Morocco, AV Actions, and Morocco Premier Events, and media partners Morocco World News, Mogador Productions and BizRadio.

AMPA is a non-profit 501(c)(3) membership organization designed to develop and maintain a strong network of Moroccan professionals in the U.S., and to develop strategic trans-Atlantic alliances in Morocco and the U.S. to promote bilateral commercial exchanges between the two countries.

COP21: Morocco One of the 4 Greenest Countries in the World