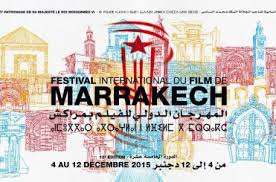 Curtains went up on Friday night on the 15th Marrakech International Film Festival, under the patronage of King Mohammed VI.

Like every year, the opening ceremony of this international event was marked by the presence of several figures from the culture and movie industry, in addition to other spheres.

The American actor and comedian Bill Murray was one among those honored at the 15th Annual Marrakech International Film Festival that was held December 4-12.

While accepting a special honor for his lengthy career in film at Morocco’s Film Festival, Murray gave a good speech in French language, expressing his thanks to the King of Morocco, the organizzers of the festival and the Moroccan people.

He also spoke out on the recent attacks in Paris and San Bernardino.

“Each and every man and woman here on the planet is a manifestation of God and to that end we must all work,” the actor said.

According to the organizers of the festival, “Fifteen feature films celebrating youth and diversity are vying for the Golden Star. They will be judged by an internationally-recognized jury, chaired by famous American director Francis Ford Coppola.”

During the eight days of the festival, 93 films from 33 countries will be screened in all sections in this year session dedicated to the celebration of Canadian cinema. Ikea May Open Its First Store in Morocco Soon