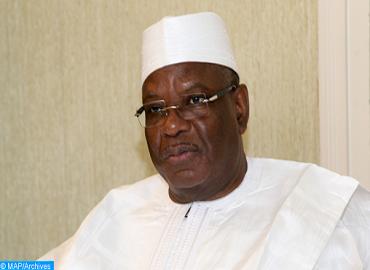 Malian president Ibrahim Boubacar Keita highlighted on Sunday the relevance and scope of HM King Mohammed VI’s initiative to train Malian imams in Morocco as an approach that “addresses the roots of evil”.

The opportunity that HM King Mohammed VI gave us “will help train Malian imams on the Islamic authentic values of tolerance and openness to spread them throughout mosques in Mali”, said the Malian president in a joint press conference with Senegalese president Macky Sall.

“When HM King Mohammed VI gave us this opportunity, some did not understand the scope of this solution and forgot that it was about training imams to tolerant and authentic Islamic and that’s exactly what we need because there is a mosque in each Malian village”, he went on in an answer to a question on his country’s counterterrorism strategy.

He added that Mali does not feel on its own in the fight against terrorism as it obtains the support of its partners who “expressed their support and reaffirmed resolve to back us”.

Meanwhile, Mali will continue to reinforce the capacities of its security and defense forces, said the Malian president.

The Senegalese president expressed to Malian peer total support following the tragic hostage-taking in a hotel in Bamako and offered his condolences, on behalf of the Senegalese people and member-countries of the Economic Community of West African States (ECOWAS) in his capacity as president of the community.