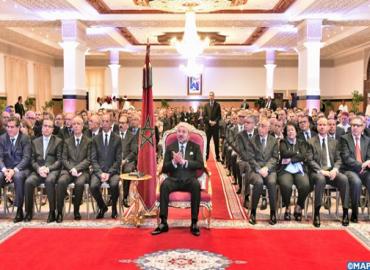 On this occasion, President of the Tangiers-Tétouan-Al Hoceima region council Ilyass El Omari gave a speech before HM the King in which he highlighted the broad lines of this program which was elaborated in conformity with the instructions laid down in the royal speech delivered following the earthquake that hit on Feb. 24, 2004, the northern region.

He added that this program seeks to develop the province’s rural and urban zones and reinforce achievements made since 2004 in Al Hoceima, giving the example of specialized hospital centers that were built, the construction of the Cherif Al Idrissi airport, the development of an industrial zone and the implementation of several social projects for youth and the underprivileged.

Wali of the Tangiers-Tétouan-Al Hoceima region, governor of the Tangiers-Assilah prefecture Mohamed Yaacoubi said that this large-scale program, totaling 6.515 billion dirhams, was based on an innovative approach in terms of comprehensiveness, integration and coherence of public interventions.

It is also aimed at supporting the province’s urban and demographic development, foster its economic positioning, ameliorate the inhabitants’ living conditions and preserve its environment, he said.

At the territorial upgrading level, the program targets rural zones (opening up rural territories, planting 8,700 hectares of fruit trees, promoting local products), the Greater Hoceima (development of the city’s entries, of the main roads, of public spaces and of parks), and the coast (building a marina and developing panoramic platforms).

It also concerns the implementation of a program for complementary urban qualification which will involve the communes of Al-Hoceima, Ajdir, Imzouren, Beni Bouayach, Targuist and emerging centers.

It also provides for the construction of schools, of a football stadium, of an Olympic swimming pool, of an indoor hall meeting international standards, and of two other indoor halls in the communes of Ajdir and Issaguen, in addition to the development of sport fields for amateur teams, the construction of an oceanographic museum, a theatre, a music conservatory and a culture house.

As for infrastructure reinforcement, this development program lays provisions for broadening and developing classified roads, creating a sea water desalination plant, supplying communes and villages under Al Hoceima province from the dams of Asseflou, Bouhouda and Bouassem, renewing and extending networks of drinking water and electricity in the cities of Ajdir, Imzzouren, Beni Bouayach, and Targuist.

At the religious level, the program involves also the construction of an administrative and cultural complex of the ministry of endowments and Islamic affairs, a mosque, a school for traditional education, in addition to the re-construction of three mosques.

On this occasion, HM the King chaired the signing ceremony of an agreement related to the implementation of the 2015-2019 Al Hoceima province spatial development program, inked by the ministers of interior, of Islamic affairs, of economy, of agriculture, of national education, of health, of tourism, and of youth and sports, in addition to ministers delegate for transportation, for environment, and for water.

The agreement was also signed by secretaries-general for housing and for culture, high commissioner for waters and forests, the wali of the Tangiers-Tétouan-Al Hoceima region, the president of the council of the Tangiers-Tétouan-Al Hoceima region, director of national office for electricity and drinking water, OFPPT director, APDN director general and president of Al Hoceima provincial council.