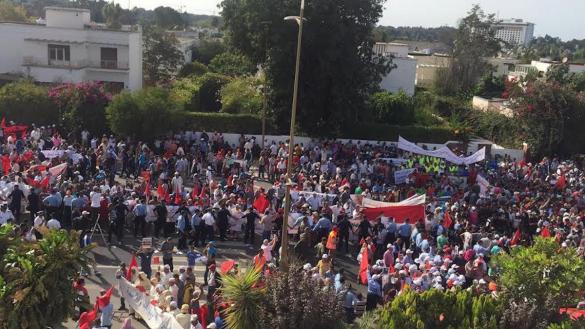 30,000 People Demonstrated in Rabat Against the Sweden Hostility to Morocco

Tens of thousands of Moroccans took part Sunday in a sit-in in front of the Swedish embassy in Rabat to protest against the position of the vis-à-vis the countries of the issue of territorial integrity of Morocco and reaffirm loudly their attachment to the Moroccan Southern Provinces of the Kingdom.

Participants from all corners of Morocco and belong mostly to organizations of civil society and human rights and to political parties, chanted slogans such as: “. Yes to No Moroccan-Swedish relations to undermine our territorial integrity “,” No to diplomatic bidding “,” Do not touch my country, “and” The Sahara is Moroccan and will remain Moroccan. ”

At the event, organized at the initiative of actors of Moroccan civil society, representatives of several NGOs, trade unions, human rights and political parties have called, in statements to MAP, a “popular mobilization” in defense of the national cause. They also advocated the use of all means of pressure available to thwart any attempt to recognize the puppet Sahrawi entity.

The protesters and denounced the flagrant interference of Sweden in the question of the territorial integrity of Morocco, who according to them, undermines UN efforts and could harm the process of resolving this issue. This interference is also able to cause serious harm to bilateral relations, in addition to the negative impact it could have on peace and regional stability.

And warn that the position of Sweden vis-à-vis the Sahara issue is likely to inflame tensions and conflicts in the region, urging the Swedish government to reconsider this position and to show neutrality.

The Sahara issue is a matter of sovereignty and national unity which cannot be any higher bid, they still said, stressing that all components of the Moroccan people remain mobilized and ready to face any attempt to undermine national sovereignty.

This sit-in protest was marked by a strong participation of organizations active civil society in the Southern Provinces and members of the Moroccan community in Sweden.