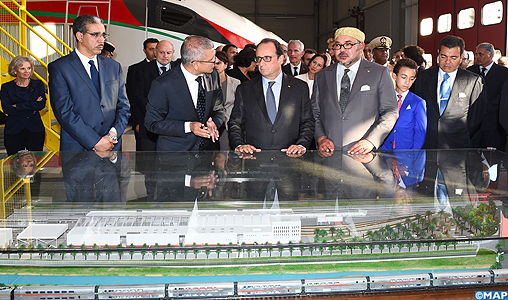 His Majesty King Mohammed VI and the President of the French Republic, SEM. Francois Hollande, conducted Saturday at M’Ghogha district in Tangier, at the inauguration of the service station of High Speed Rail, a structuring project promoting the transfer of technology and know-how between the two countries.
Produced for a total investment of 640 million dirhams, this workshop is part of the high-speed line project (LGV) Tangier-Casablanca which also includes the construction of a new line Tangier-Kenitra 200 km electrified double track, the foundation construction work in Kenitra and Tnine Sidi El Yamani, the redevelopment of two terminal installations (stations of Kenitra and Tangiers), the acquisition of 12 High Speed Trains and development of new stations LGV in Tangier, Kenitra, Rabat-Agdal and Casa-Voyageurs.
The new Action Center, located a few kilometers from the station terminus of Tangier will, initially, reassembly of high-speed trains elements from the Alstom plant in La Rochelle (France), via the port of Tangier Mediterranean. He will be responsible, in a second stage, in particular during the operation phase, control and repair operations of high-speed trainsets.

The workshop M’Ghogha has, moreover, already received two high-speed trains (TGV), the first in June and the second at the beginning of the current month. The assembly of the components of these trains began upon receipt.
Directed accordance with international standards by a group of national companies, this workshop has facilities and advanced tools to perform various maintenance levels. These can cover both operating in surveillance operations, as periodic revisions organs or mechanical examinations and regular part replacements.
With a capacity of 30 trains, the workshop (14 hectares) includes in particular the technical and administrative buildings (20,000 m2) of 14 electrified tracks 10 km long with a centralized signaling equipped with a switching station computer , a washing station to scroll and specialized workshops.
This major project is part of the high speed lines of the master plan which aims to build a network of about 1500 km, comprised of the axis Atlantic Tangier-Casablanca-Agadir and Maghrebian axis Rabat-Fez-Oujda.
Mobilizing significant investments, the project line in Grande Tangier-Casablanca Speed is the first step of this Master Plan and is to improve the service offering by reducing journey times and allowing more comfort and safety to users the train.
Thus, the Tangier-Casablanca high-speed line will allow a significant reduction in travel time (Tangier-Rabat in 1:20 instead of 3:45 ET Tangier-Casablanca in 2:10 instead of 4:45), the increase in passenger numbers on this route 3 million per year at present to futures 6,000,000, reconciliation and synergy of the two most dynamic regions of the Moroccan economy, the historical center of Casablanca-Rabat and pole emerge around Tangier.
With the construction of the first line for high-speed trains, Morocco will be the first country in Africa and the Arab world to have a rail system of a very high technological level that opens the way for future achievements in reaching.
On this occasion, His Majesty King Mohammed VI and SEM. Francois Hollande, visited one of the two High Speed Trains supplied by the French company Alstom and reassembled to M’Ghogha maintenance workshop.