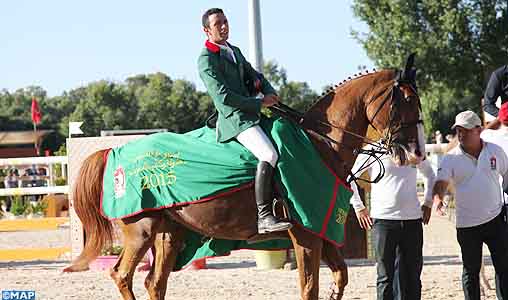 Al Ahrach, an associate of the Royal Equestrian Club of Tangier and the Straits riding horse “Sonny” succeeded the winners of this prestigious competition to Abdelkebir Ouaddar, winner in 2014, having completed the two rounds of this event in 82sec 54 / 100th, with a total of 17.34 penalty points.

El Alaoui Reifhi, amount “What Love France”, won in 47 seconds 15 / 100th after a dam without fault path after two innings, followed by Adam Redouane amount “Paco From Jaquet”, author also of a dam in clear round (47.46).

The third place went to Badr Anas on “Pimrenel Saint Pierre” with a time of 70.49 and 4 penalty points.

Organized by the Moroccan Royal Federation of Equestrian Sports (FRMSE), the event, which brought together the best riders and horses of different ages, experienced programming competitions for categories “A”, “B”, “C”, minimal , cadets, criterium, juniors and seniors (men and women), in addition to Morocco Championships dressage, endurance (60km, 90km and 120km) and clubs.