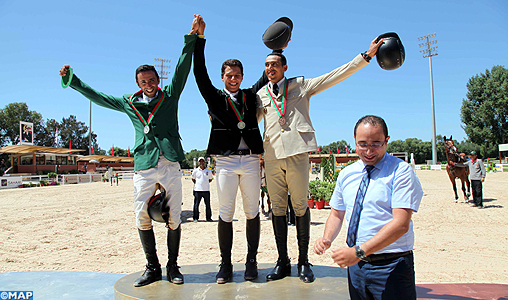 El Ghiouani, Temara Cavalry of the Royal School, has won this event contested over two legs after a dam match (no fault).

Counting for the championship of Morocco Military B, played in two runs after the dam, the first place went to Ilyass Aalam amount Dastana (Cavalry School of the Directorate of National Security) followed in 2nd position of Lieutenant Mohamed Amine (Royal Guard ) on “So Black”. Lieutenant Mohcine El Khazarji on “Carpriccia” (Royal School of Cavalry) completed the podium.

After this test, it was conducted the awards and medals to the first three winners.

Organized by the Moroccan Royal Federation of Equestrian Sports (FRMSE), this event includes programming competitions for categories “A”, “B”, “C”, minimal, cadets, criterium, juniors and seniors (men and women) and that Morocco championships dressage, endurance (60km, 90km and 120km) and clubs.

Week of horse-2015 brings together the best riders and horses of different ages, in the junior categories, seniors (men and women) and Special Olympics.

This prestigious equestrian event will be enhanced by organizing Sunday’s Grand Prix HM King Mohammed VI counting for the final of the senior championship Morocco. The International Cultural Moussem of Assilah Kicked Off Friday

IMF: Strong Performance of Moroccan Economy with Growth Recovery in 2015