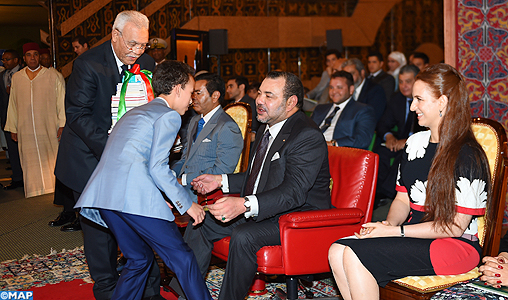 Rabat – His Majesty King Mohammed VI chaired on Tuesday at the Royal School at the Royal Palace in Rabat, the end of school year 2014-2015 ceremony.

The ceremony was attended by their Highnesses the Princes and Princesses, began with the recitation of verses from the Holy Quran by HRH Crown Prince Moulay El Hassan.

HRH Crown Prince Moulay El Hassan then delivered an address to the Sovereign, in which he expressed in his name and that of his sister, Princess Lalla Khadija and all their classmates, his great honor and immense joy for kindness and high care of Majesty King kindly surround the ceremony.

HRH Crown Prince Moulay El Hassan expressed, on this occasion, his determination, and that of Princess Lalla Khadija and all their classmates, to continue their work efforts to be always the level of confidence of the Sovereign, they are attached to HM the King and guidance in continuing pursuit of science and knowledge.

HRH Crown Prince Moulay El Hassan prayed the Almighty to grant health and long life to His Majesty the King and the Sovereign fill in all the members of the Illustrious Royal family.

The director of the School, Aziz El Houcine was then delivered to HM King a speech in which he expressed on his behalf and on behalf of all executives of the Royal School, the pride brands and joy for the High solicitude the Sovereign surrounded the ceremony.

He stressed that HRH Crown Prince Moulay El Hassan and HRH Princess Lalla Khadija have passed this school year, thanks to their efforts, their intelligence and discipline.

The Sovereign presented the award to the student Progress Mohamed Ichou.

Took part in the ceremony, the Head of Government Abdelilah Benkirane M. and Minister of National Education and Vocational Training, Mr. Rachid Belmokhtar. Azoulay in Canada: Centuries-old Ties between Islam and Judaism in Morocco