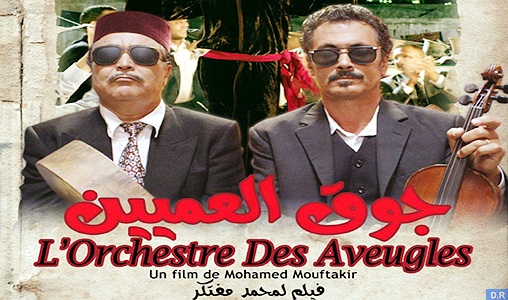 The Golden Wihr, the most prestigious award of the festival was awarded to Moroccan filmmaker, during the festival’s closing ceremony held from 3 to 12 June in the city in western Algeria.

In a statement to the press, the Moroccan director welcomed this distinction which is for him “an honor and pride.”

The film “The orchestra of blind”, which was among the twelve works competing in the category of feature films, the story of a popular orchestra led by Hocine (Younes Megri), who resides with his wife Halima ( Mouna Fettou) in the family home of the latter, a lively home to colorful characters who live to the rhythm of the orchestra and its traditional dancers.

Men musicians of this very special orchestra are sometimes forced to impersonate the blind – hence the title of the film – in order to play at parties reserved for women organized by conservative Moroccan families.

Hocine is also the father of Mimou (Ilyas El Jihani). He takes his role very seriously and wants the best for his son. But Mimou will quickly fall in love Chama, the new good of their neighbor, and not to disappoint his father, he will cheat by falsifying his report card.

Through this film, Mohamed Mouftakir returns on part of his childhood, questioning his experience and his relationship with his father until his death when he was 11 years old.

“This is a social comedy 50 percent autobiographical,” he told the Mouftakir filmmaker after the screening of the Maghreb room of Oran.

One of his first short films, “Dirge” (2007) won prizes abroad, including the Pan-African Film and Television Festival of Ouagadougou (FESPACO, Burkina Faso).

In 2009, his first feature film “Pegasus” (2009) ranks among the high hopes of Moroccan cinema after winning several awards at various film festivals, including the Grand Prix Festival of Tangier (2010) and The Golden Stallion FESPACO (2011).