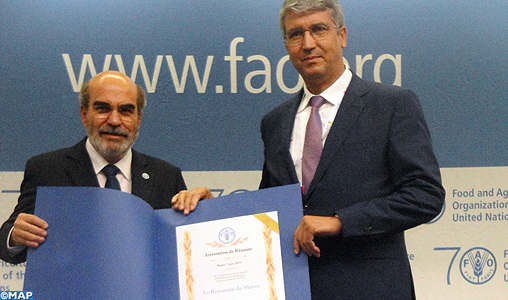 Rome – Morocco received Sunday in Rome, the United Nations Organization distinction for Food and Agriculture (FAO) for the realization of the first Millennium Development ( MDG-1 / c) of reducing extreme poverty and hunger and, in two years ahead of schedule (late 2015). The Director-General of FAO, Jose Graziano Da Silva, presented the award to Mr. Mohammed Sadiki, Secretary General of the Ministry of Agriculture and Maritime Fishing, during an official ceremony held in the framework of the 39th Session of the FAO Conference, held in the Italian capital from 6 to 13 current and attended by particular Malian President Ibrahim Boubacar Keita, prime ministers, deputy prime ministers, ambassadors and senior representatives of FAO member countries.

In addition to Morocco, 71 other countries were honored for reaching the goal 1C number among the Millennium Development Goals (MDGs) of reducing by half the proportion of hungry and / or center the target “more rigorous “World Food Summit (WFS) in 1996 of reducing by half the number of hungry.
The Millennium Development Goals are eight goals adopted in 2000 in New York (USA) with the Millennium Declaration of the United Nations by the 193 UN member states and at least 23 international organizations, agreed to reach by 2015.