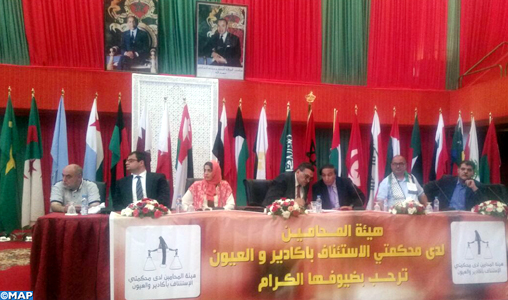 Laayoune – The Arab Lawyers Union (ALU) confirmed, Sunday in Laayoune, its support to provincial autonomy project to the south of the Kingdom, during the closing session of its Bureau work Standing, which started on May 28 in Agadir.

In the final communiqué and the draft recommendations which sanctioned the work of this session, organized by the Bar near the Courts of Appeal of Agadir and Laayoune, under the sign “the pan-Arab security: reality and prospects” ALU stressed that the autonomy proposal is a legal and realistic platform to solve the artificial conflict over the Sahara.

This proposal, widely welcomed internationally, embodies the sovereignty of Morocco over its Sahara and its southern provinces, said the ALU, telling that it ardently determined to work and from its position to support the unity and sovereignty of the Arab country over their own territories and support the artificial conflict resolution efforts caused between Arab countries on the one hand, and Arab countries and other neighboring countries, on the other.

In this sense, the ALU has affirmed its support for the Mediation Committee under the Union for the reopening of the border between Morocco and Algeria, in order to achieve complementarity and economic cooperation between the two countries.

Moreover, ALU emphasizes recovery and improvement of inter-Arab relations, on the revival and development of neighborhood ties and the development of the Arab League, calling to set up a platform for cooperation between Arab countries and to dispel any disputes that cause the breakdown of their relationship, through the establishment of a parallel diplomacy and to preserve their territorial integrity and national unity.

The final press release also condemned terrorist organizations and armed actions in the Arab world, including Syria, Iraq and Libya, and the barbaric Israeli aggression against the Palestinian people, calling on Arab states to support the people and the ‘Palestinian Authority for the creation of a secure state with Al-Quds as its capital.

The ALU also called for providing financial assistance to Lebanon, so that it can support Syrian refugees fleeing from war in their country, calling for the support of Libyan unity and dialogue between the different parties to reach a political solution paving the way for peace and stability in that country.

The work of the meeting focused on the discussion of organizational issues and the presentation of the 2014 financial report and the budget estimate for 2015.