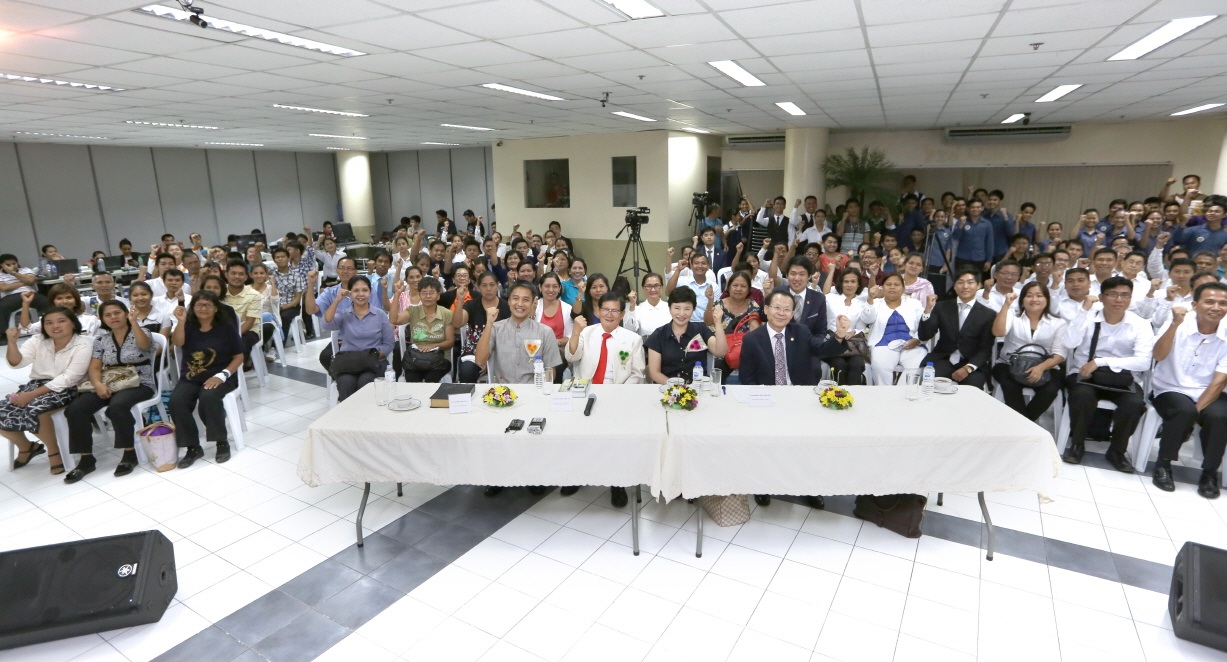 “The light of the world”: Unveiling of the Mindanao Peace Agreement Monument Designating HWPL Day as a day of peace

Manila & Maguindanao, Philippines- A peace advocate and Chairman of Heavenly Culture, World Peace, Restoration of Light (“HWPL”), Mr. Man Hee Lee, who solved a 40-year conflict of Mindanao between government forces and the Moro-Islamic Liberation Front (MILF), returned to the region for the 2nd Annual Commemoration of the Declaration of World Peace. For the first time in history, Chairman Lee proclaimed the Declaration of World Peace on May 25th 2013 and this year marks its 2nd year anniversary. He was accompanied by Chairwoman Nam Hee Kim of International Women’s Peace Group (“IWPG”) and HWPL’s peace delegation. Starting on May 22nd, in the midst of a tight schedule, Chairman Lee and the peace delegation have led the World Alliance of Religions’ Peace (“WARP”) Office Meetings, Peace Dialogue with political leaders, judicial officers, and heads of military forces in major cities such as Manila, Maguindanao, Cagayan de Oro, and Davao. On May 25th 2015, at the 2nd Annual Commemoration of the Declaration of World Peace, the unveiling ceremony of Mindanao Peace Agreement Monument was held.

After arriving in the Manila airport on May 22nd, Chairman Lee held a meeting with the Integrated Bar of the Philippines (IBP), the national organization of lawyers, as the first part of his 18th World Peace Tour. Juanito Victor C. Remulla Jr., the Governor of Cavite, Esmael Toto Mangudadatu, the Governor of the Province of Maguindanao and Muslim representative, and Filipino leaders from all walks of life came to meet Chairman Lee. Vincent M. Joyas, IBP National President, has expressed his support in assisting the enactment of an international law for peace and will further collaborate with Korean professors in the expertise of international law.

Chairman Lee gave a keynote speech on the topic of ‘Heavenly Culture, the essential ingredient in bringing world peace’ during the mass led by Archbishop Antonio Ledesma of the Metropolitan Archdiocese of Cagayan de Oro. At the conference with politicians and religious leaders in Cagayan de Oro, Chairman Lee also delivered a speech on the topic of ‘the role of religious leaders in conflicted areas’, emphasizing the significance of the religious leaders’ parts in conflicts and disputes while Chairwoman Kim spoke about the role of youths and women in peace building. In her speech, she said, “There is no more powerful driving force than the spirit of youths and the hearts of mothers in establishing peace”, drawing an enthusiastic applause from the participants. Furthermore, the WARP Office Meeting was held under the topic of “Birth, Aging, Sickness, and Death in the context of religious scriptures” Currently, HWPL’s WARP Offices are dramatically arising in 62 cities in 40 countries around the world including but not limited to Philippines, United States, United Kingdom, and India, reminding religious leaders of their significant roles in the establishment of peace.

Back in January 2014, the signing of the alliance of religions agreement led by Chairman Lee and conducted between the Catholic and Muslim leaders has brought a cease-fire of a 40-year conflict in Mindanao. Governor Esmael Toto Mangudadatu sent a special invitation to Chairman Lee to celebrate the day of the signing of peace treaty as well as the 2nd Annual Commemoration of the Declaration of World Peace. Officially proclaiming January 24th as HWPL day of Maguindanao as a day of peace, the commemorative event particularly included the unveiling of the Mindanao Peace Agreement Monument. The International Peace Youth Walk Festival was followed after the ceremony and over 3,000 youths in Maguidanao marched together.

Generose Coyme, a youth participant of the rally shared how she was deeply moved, “Mindanao bears too much pains and sorrows. It is one of the most conflicted regions in the world. From seeing HWPL’s active involvement in Mindanao with their peace initiatives every year, I can feel that this purely civil organization looks after the whole world and loves the neighboring countries as their own.” The memorial demonstrated the unity and commitment of the people of Mindanao embracing people from different backgrounds and defining the right framework for the community to achieve sustainable peace.

Chairman Lee introduced the work of HWPL in his speech as follows, “We are undertaking the global initiatives to bring sustainable peace for all and to fulfill what is stated in the Declaration of World Peace.” He continued to urge the participants to join the peace movement by saying “Every global citizen, regardless of their social status, should work as messengers of peace, putting efforts to bring forth our common goal.” He highlighted the urgency of improving the current situations of many countries by continuing his statement, “No country should experience wars rooted in religious misunderstandings” Supreme Court Justice Sheikh Khalifa B. Nando of MILF who signed on the agreement of the enactment of an international law for peace has agreed that it is necessary to collaborate efforts of people to amend such legislation.

In the meantime, the mayor and members of the city council of the city of Alexandria, Virginia has acknowledged HWPL’s dedication in bringing people of different religions together for the establishment of peace and has recently proclaimed September 18th as the ‘World Alliance of Religions Day’ to commemorate the World Alliance of Religions’ Peace (WARP) Summit, an unprecedented international peace festival held by HWPL on September 18th in Seoul, Republic of Korea.

In addition to the accomplishments above, the National Assembly of Ecuador has recently conferred an award of national recognition to acknowledge and cooperate with the works of HWPL for the commemoration of May 25th. In the preamble to the award, the government of Ecuador recognizes that HWPL has dedicated, since its foundation, the efforts and energy aimed at actively pursuing missions widely supported by many countries while solving current issues of the world for the purpose of restoring human dignity. While the government also recognizes the works of IWPG and IPYG, the award of national recognition highlighted hard work of Chairman Lee of HWPL in spreading the global peace movement. The National Assembly of Ecuador has expressed its sincere gratitude for Mr. Lee’s spirit of volunteerism and his dedication toward preserving and fostering culture of peace.

While May 25th is becoming a crucial day bringing the sensational wave of peace worldwide, Chairman Lee sent a letter from Philippines on 24th of May to the members of International Peace Youth Group (“IPYG”) and IWPG. In the letter, he delivered his message that “The youth’s work will be the force that will put an end to all wars on this earth and create peace that will be left as a legacy for the future generations. Let us not forget this day and hold commemorative ceremonies. Let us announce this to the world so that everyone may become a peace messenger and work with us in creating the light of glory.”

The growing support and cooperation of the international community for the observance of the World Alliance of Religions Day as well as HWPL Peace Day have demonstrated that the peace works of HWPL provide an effective way to cease conflicts and promote a peaceful world.

Northern Mali: Three peacekeepers injured in the explosion of a mine