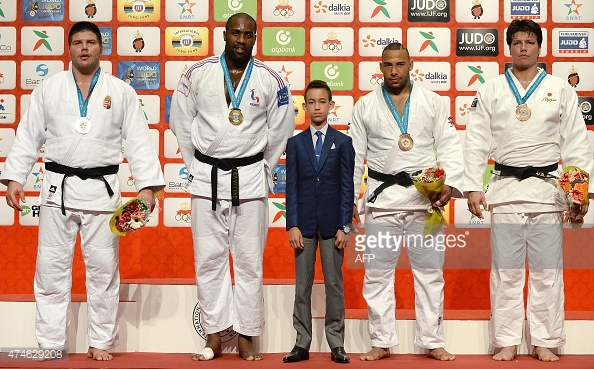 Rabat – The French judoka Teddy Riner has confirmed its position as the global superstar judo by winning the final spot +100 kg for the 5th edition of the World Judo Masters Mohammed VI, held this weekend at the Sports Palace of Prince Moulay Abdellah sports complex in Rabat.

Judoka 26 years Olympic champion and seven-time world champion, won gold by dominating the Hungarian Barna Bor on Ippon. He followed four ippons in as many fights, after six months without competition because of injury.

The Georgian Beka Gviniashvili won gold in the under 90kg by beating the Japanese Yuya Yoshida (silver).

Ladies side, Dutchwoman Kim Polling is mounted on the top step of the podium in the category of -70 kg defeating Colombian Yuri Alvear (silver).

This edition, under the High Patronage of HM King Mohammed VI and organized under the auspices of the International Judo Federation (IJF) is a race entered in the World Judo Tour and qualifying for the 2016 Olympic Games in Rio de Janeiro .

This great event, organized for the first time in Africa, received exceptional media coverage with the presence of nearly 150 national and international media outlets, according to the director of communication, cooperation and legal studies at the Department of Youth and Sports, Yacine Bellarab.

It brought together about 250 judokas and global best judokas including Olympic champions representing sixty countries.

Morocco is the first Arab and African country to organize a competition of this magnitude. He also hosted several global importances of judo competitions including the Junior World Championships and the Open Continental Casablanca, having attracted a large number of international judokas.

The World Judo Master is a competition organized each year by the International Judo Federation. It brings together the top 16 since 2010 judokas of each category which can be added a judoka representing the host country.