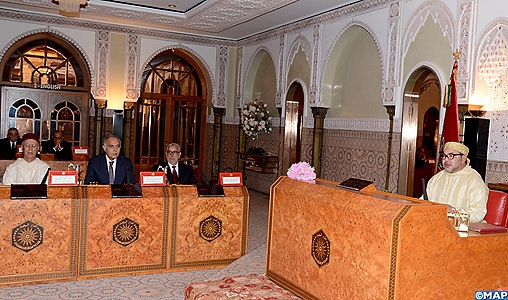 Casablanca – His Majesty King Mohammed VI presided Friday at the Royal Palace in Casablanca, a cabinet in which three draft organic laws were adopted, two projects Decree on military and many international conventions, said the Spokesperson of the Royal Palace, Mr. Abdelhak Lamrini in a statement.

As part of preparations for the upcoming elections, the Council considered and adopted three draft organic laws relating to the House of Councillors, political parties and the election of board members of local authorities.

The draft organic law on the House of Councillors is to set at 12 the number of regions in which are elected members of the House of Councillors, reserving two seats to represent the Council in each region, and allocating seats intended to represent the professional chambers in the Council and reviewing the division of electoral constituencies on the most representative professional organizations.

The draft organic law on political parties tends to establish the principle of coalition parties, allowing two or more parties to form a coalition and to present common candidates in the municipal and local elections and the election of members of the Boards professional and the opportunity to present joint lists in the divisions where the list system or the individual ballot. It also provides the opportunity for the coalition to benefit from the financing of election campaigns.

The organic law on the election of board members of local authorities aims in particular to adapt it to the amendments introduced to the organic law of political parties, the establishment of the principle of the single ballot in the regional elections and communal, the institution of a single constituency in each province or prefecture and the presentation of a single list of candidates composed of two parts: one devoted to the candidates and a women-only party.

Furthermore, in accordance with Article 49 of the Constitution, and Head of Government’s proposal and initiative of the Minister of Interior, HM the King, appointed Mr. Abdellatif Hammouchi , Director General of National Security, while retaining his post as head of the General Directorate of Territorial Surveillance (DGST).

In the framework of strengthening cooperation between the Kingdom of Morocco and number of brotherly and friendly countries and regional and international organizations, the Council of Ministers approved 12 international conventions, including two multilateral and bilateral ten relating, in particular, on judicial cooperation and security, the fight against terrorism, the environment, mutual assistance in tax matters, air services, renewable energy and energy efficiency.