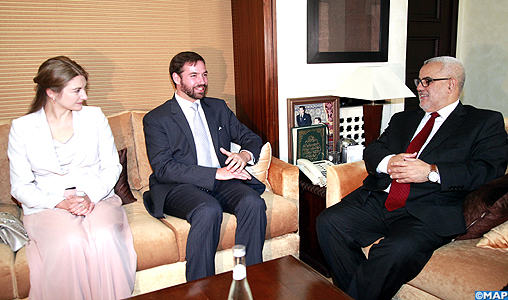 Rabat – The head of government, Abdelilah Benkirane received on Monday in Rabat, HRH Prince Guillaume, Hereditary Grand Duke of Luxembourg who presides, from 27 to 29 April, an economic mission to the Kingdom, led by the Deputy Prime Minister, Minister of Economy, Stephen Schneider.

The official delegation also composed of Princess Stephanie, Grand Duchess of Luxembourg Heir, will have interviews with members of the Moroccan government on strengthening bilateral economic relations, had announced the Ministry of Economy of the Grand Duchy of Luxembourg in a statement.

During this mission, and especially at a seminar to be held in Casablanca on April 28, two economic sectors prevail: ICT and environmental technologies. Much of the 40 companies that accompany the Luxembourg delegation within the two sectors.

Composed of forty companies among the cream of large Luxembourg companies specialized in the field of finance and new technologies, this mission will allow the Grand Duchy of economic operators to identify new avenues of cooperation with their Moroccan counterparts and develop opportunities affaires. Inauguration of the Crafts exhibition in Alexandria “Moroccan Days”