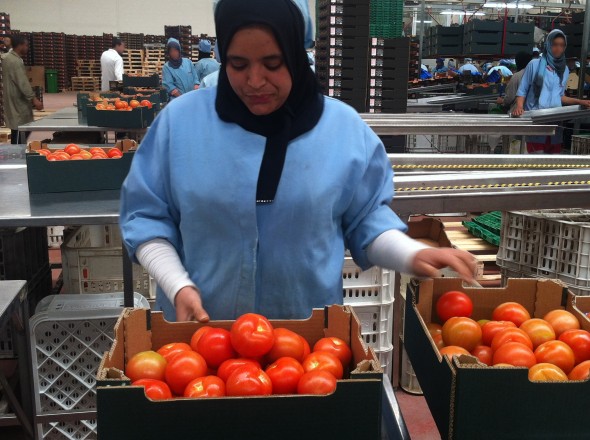 Tomatoes: the new entry price system on the European market is fair to all operators

Rabat -The new system entry price of fruit and vegetables on the market of the European Union, in force since October 2014, including the calculation of the standard import value (VFI) of Moroccan tomatoes, is transparent and fair to all operators, according to the Ministry of Agriculture and Marine Fisheries.

“Morocco and the EU agree that this new system is transparent and fair to all operators. The daily record of PFD in this campaign has also accurately reflects the prices observed on EU markets” , noted a statement from the ministry arrived Wednesday.

This new system has undergone a rigorous application for effective monitoring of Morocco originally price, the source added, noting that that system did not cause any disturbance on the European market for fruits and vegetables.

It will continue, according to the ministry, to be a common and close monitoring, including the next export season to ensure it continues to reflect the transparency of prices for Moroccan products entering the European market.

At the end of March 2015, EU to tomato exports ranged broadly at the same level compared to the same period of the previous year, it was added the same source.

Prices made by Morocco, however, have been better this season, the statement which falls, as example, the market of St. Charles, which represents the bulk of transactions, Morocco tomato was marketed during much of the country, at prices ranging from 0.8 / 0.9 to 1.3 / 1.4, with the exception of periods coinciding with specific business conditions, including pay and school holidays during which prices fell while staying at the correct levels.

Moroccan tomato exports are subject to a coordinated action by the futures Coordination Committee, which proceeds from the month of September in a management the export season and in the light mainly of tomatoes device contained in the EU Morocco Agreement and market developments.

Coordination of measures includes in particular a quantitative management, rigorous qualitative selection and regular monitoring of the evolution of market conditions.

The coordination action extends to non-EU markets absorb diversification for several years, significant amounts of our tomato exports, contributing to the balance of the European market.

Paris-Agadir Plane of RAM had an emergency landing in Casablanca