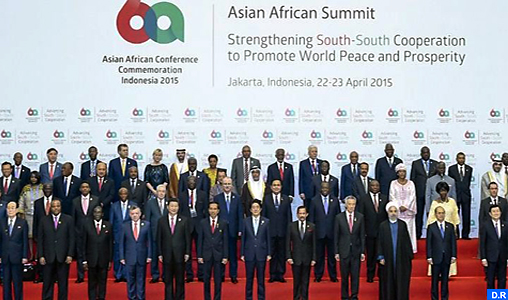 Jakarta- The Heads of State and Government attending the Asia-Africa Summit welcomed on Thursday after their work in Jakarta, the sustained efforts that His Majesty King Mohammed VI, Chairman of Al-Quds Committee, continues to deploy in support of the Palestinian cause and the preservation of the civilizational character of the Holy City.

The Final Declaration of Jakarta summit highlights efforts at all levels by the Sovereign, especially on the international scene in order to preserve the cultural identity of the holy city, a symbol of peace and cultural coexistence.

The text also emphasizes the diplomatic action of HM King in various international meetings to encourage the international community to assume its responsibility towards the Palestinian cause.

Morocco was represented in the work of this summit by a delegation led by the Minister of Affairs and Cooperation, Salaheddine Mezouar.

Organized in commemoration of the 60th anniversary of the Bandung Conference (1955) under the theme “Strengthening South-South cooperation to promote security and economic development in the world,” the Africa-Asia summit assigns aims to promote exchange experiences and to reflect in order to promote close cooperation between Africa and Asia in the political, economic, social and cultural fields in order to build a better future, in the spirit of the Declaration Bandung to establish a strategic partnership between Asia and Africa aimed at developing economic and investment sectors and address common challenges in the context of South-South cooperation.

The Africa-Asia Summit which was held from 28 to 24 April 1955 in Bandung, with the participation of 28 Asian and African countries, stressed in its final declaration the need to respect national sovereignty and territorial integrity of the country and to strengthen economic and cultural cooperation between Asian and African states. Tomatoes: the new entry price system on the European market is fair to all operators