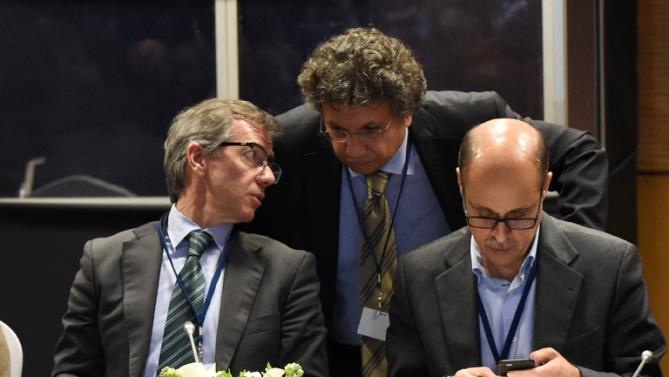 End of the second day of the inter-Libyan political negotiations

Inter-Libyan political talks, which resumed Friday in Skhirate, near Rabat, in the presence of representatives of the warring parties to find a peaceful solution to the political crisis in Libya is place in a “positive spirit”, told the press the Special Representative of the UN Secretary General for Libya, Bernardino Leon.
The parties have shown a “good positive spirit” during the second day of political talks, which are attended by several foreign ambassadors, including France, Italy, Spain, the United Kingdom and Germany, the UN official said, noting that the parties need time to agree.
The UN envoy meets separately with each party in order to reconcile the positions, he added, noting that the discussions concerned in particular the establishment of a cease-fire and the surrender of weapons by the various armed groups, especially in the capital Tripoli.

The parties will also discuss the criteria to be met by candidates for the Prime Minister and Deputy Prime Minister of the next government, he added Alouafi Mohamad, noting that each party will deepen discussions and consultations in Libya about these issues before returning Tuesday to Morocco to meet again under the auspices of UN mediator Bernardino Leon.
The warring parties, who scored a lunch break this afternoon, will resume talks around 17:00.
Friday morning, each of the Libyan delegations participating in the dialogue initiated consultations within it, we learn a diplomatic source on site.
The first day of inter-Libyan political negotiations was marked by the spirit of “positive and constructive” which have shown the warring parties, stressed the Special Representative of the UN Secretary General for Libya, Bernardino Leon.
During the day, Bernardino Leon had met with each of the two delegations separately with several foreign ambassadors (France, Italy, Germany, Spain, United Kingdom and European Union as observers, etc.).
On Wednesday, the UN Support Mission in Libya (UNSMIL) announced the holding in Morocco this round of Libyan political dialogue, after all the invited parties have expressed their agreement to participate in this meeting.
“The parties have formally communicated their decision to take part in this dialogue after close consultation with Bernardino Leon, during his visit to Tobruk and Tripoli March 2, 2015,” had said the MANUL in a statement. Inter-Libyan dialogue: “Advanced” on the records of the government of national unity and security arrangements