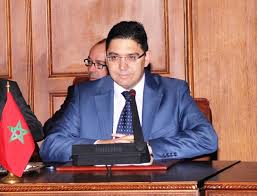 The Secretary General of the Ministry of Foreign Affairs and Cooperation, Nasser Bourita, stressed, Tuesday in Rabat, Morocco’s strong commitment to support the efforts of the global fight against nuclear terrorism Initiative (IGLTN).

“Active participation and longtime Morocco to the efforts of IGLTN reflects the firm and unequivocal commitment of the country in the fight against nuclear terrorism, in accordance with the vision of His Majesty King Mohammed VI,” said Mr. Bourita, opening a meeting of the working group for the evaluation and implementation of IGLTN organized by Morocco and the Co-chairs of the IGLTN, the United States of America and the Russian Federation. The commitment of Morocco in the field of the fight against nuclear terrorism, he said, carries particular on supporting multilateral efforts to address the challenges of nuclear international security, in addition to maintaining a balance between prevention against diversion of nuclear material, on one hand, and the right to the peaceful use of nuclear energy, on the other.

In this perspective, Morocco is actively engaged in organizing meetings and seminars on the prevention of nuclear terrorism and the relevance of the IGLTN in the fight against this scourge, said Mr. Bourita.

The meeting comes at a critical context marked by the upsurge in violent and barbaric terrorist acts around the world, he continued, noting that terrorism has become a major challenge and a major threat to international security.

It has also called on the international community to be vigilant, citing the danger that can represent terrorists if they manage to obtain weapons of mass destruction, particularly nuclear and radiological materials.

The meeting in Rabat, which will continue until Thursday and will know the holding of several plenary sessions around the theme of the fight against nuclear terrorism is fixed main objectives of preparing the political meeting of the High Level IGLTN that held in June in Helsinki (Finland), to facilitate the adoption of the documents of the three working groups of the IGLTN (Detection, Forensics, response and Mitigation) and to review the strategy for the period 2015-2017.

This meeting knows the participation of some 200 representatives from 85 countries IGLTN partners, experts in the prevention, detection and response to radiological and nuclear implications, as well as international observer organizations (IAEA, INTERPOL, EU and UNODC ).

The chairs Morocco, from Daejeon meeting in South Korea in 2011, the working group on preparation and response to radiological and nuclear effects and actively participates in various workshops and exercises in this initiative.

The IGLTN, which held its first plenary meeting in 2006 in Rabat, is an international coalition of the willing co-chaired by the United States of America and the Russian Federation. It wants an operational forum for exchange of information, expertise and best practices in the detection, prevention and response to radiological and nuclear implications.