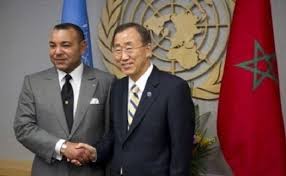 During this interview, Mr. Ban Ki Moon thanked His Majesty the King for the active and constructive engagement of the Kingdom in support of the UN agenda whatsoever for peacekeeping, promotion human development and the fight against extremism and radicalization, the statement said.

His Majesty the King assured the Secretary General of the United Nation support for the implementation of the current priorities and proposed to the UN, in particular those relating to the Millennium Development Goals MDGs post 2015 climate change and the consolidation of operations peacekeeping, the statement added.

Regarding the issue of the Moroccan Sahara, the UN Secretary General informed His Majesty the King that he took due account of Morocco’s comments and observations and gave firm assurances as to the neutrality, objectivity and impartiality of the UN officials in charge of the conduct of the UN facilitation, said the source.

Similarly, Mr. Ban Ki Moon said that MINURSO will continue its mission in strict compliance with its current mandate.

Based on the clarifications made and assurances given, His Majesty the King confirmed to Mr. Ban Ki Moon Morocco’s commitment to support the facilitation led by the Personal Envoy and full cooperation with the officials designated for this purpose by the Secretary General, concluded the statement of the Royal Cabinet. The leader of the anti-Islam movement Pegida resigned