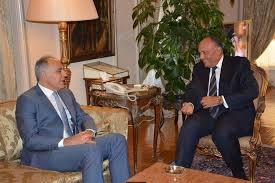 The Egyptian Foreign Minister, Mr. Sameh Shoukry reaffirmed the commitment of Egypt to the territorial unity of Morocco and its support for the autonomy initiative proposed by Morocco to end the Sahara conflict.
“Regarding the Sahara issue, the Egyptian Foreign Minister reaffirmed the commitment of Egypt to the territorial unity of the Kingdom of Morocco and the UN solution to the Sahara issue and its support for the security Council’s resolutions on the Moroccan autonomy proposal and has pledged favorably Moroccan effort as serious and credible, to move forward towards resolution “of this conflict, said the joint communiqué released Friday night on the occasion of the visit to Morocco of the Egyptian Foreign Minister.
Mr. Choukri has likewise welcomed the progress experienced by the Morocco under the leadership of HM King Mohammed VI, in democratic transition, and in the area of social and economic development, highlighting the boom achieved in terms of infrastructure development, climate improvement business and the attraction of foreign investment, in addition to national strategic development plans in various vital sectors, particularly industry, agriculture and tourism.

For its part, the statement, the Moroccan Minister of Foreign Affairs and Cooperation, Mr. Salaheddine Mezouar, “reaffirmed Morocco’s position supporting the process of democratic change in Egypt and the support given by Morocco to the sheet route taken by the people of Egypt, following the revolution of June 30, for the election of democratic institutions, starting with the referendum on a new constitution, which was approved in early 2014, followed by the election of His Excellency the President Abdelfettah Al Sissi, last June in a free and fair election, reflecting the will of the overwhelming majority of the Egyptian people, to achieve the planned organization of legislative deadlines in March 2015 “.
Mezouar also emphasized the “firm support of the Kingdom to Egypt to terrorism and its condemnation of any act of endangering the stability and security of Egypt.”
Moroccan party has, on the other, called “perfectly convinced that the presidency by his Excellency President Al Sissi Abdelfettah the next Arab summit in March 2015, will mark a positive joint Arab action in the service of the causes of the Arab nation and the prosperity of its peoples.