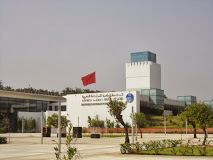 An international scientific symposium on the relationship of religion and liberty

An international scientific symposium on the question of the relationship of religion and liberty, held on November 17 and 18 in the auditorium of the National Library of the Kingdom of Morocco (BNRM) in Rabat.
This symposium, organized by the “Damir” movement in partnership with the BNRM and Neumann Foundation, held on the eve of the World held in Morocco on Human Rights Forum (November 27 to 30 in Marrakech), “in regional and international situation characterized by the rise of new forms of intolerance, exclusion and persecution and extermination by referred for religious reasons, “a fact that is” highly disturbing, “said a statement from the organizers.
The participants of this international conference focused on “issues of theoretical system concerning freedom of belief and conscience, discussed the place given to those freedoms in the Arab constitutions and conclude with the role that civil society this debate, “the statement said.

The conference will be attended by scholars, activists and religious men came, off Morocco, Iraq, Syria, Egypt, Tunisia, Algeria, France and Germany. FUS of Rabat won his sixth Throne Cup of football