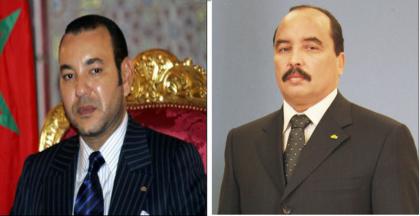 HM King Mohammed VI held, on Tuesday morning, a phone conversation with H.E. Mohammed Ould Abdelaziz, president of the Islamic Republic of Mauritania, said a statement by the Royal Office.

During this phone call, HM the King reiterated to H.E. the president his unwavering support and friendship, as well as his attachment to the good neighborliness and solidarity relation between the two countries, based on the

long-standing and family relations which have always existed between the two peoples, the statement added.

HM the King also reassured H.E. the president that Morocco recognizes the territorial integrity of the Islamic Republic of Mauritania, pursuant to international law, it noted.

The two leaders also expressed their determination to preserve this relation against any attempt seeking to undermine it, regardless of its origin and motives, the same source said.

In this regard, HM the King decided to dispatch head of government Abdelilah BENKIRANE and minister delegate for foreign affairs Nasser BOURITA to the Mauritanian president.

HM the King asked the head of government to clear up any misunderstanding that could have a negative impact on the excellent relations between Morocco and Mauritania.