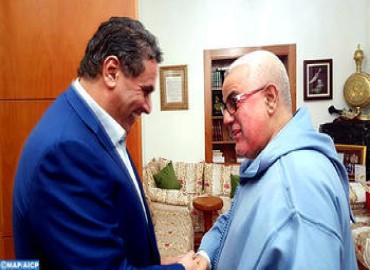 Secretary-General of the Justice and Development Party (PJD) and appointed Government Head, Abdelilah Benkirane, on Monday evening resumed his consultations for the formation of the new government by meeting President of the National Rally of Independents (RNI), Aziz Akhannouch.

“I agreed with the appointed Government Head to resume consultations in three days”, Akhannouch briefly told the press following this meeting.

The resumption of consultations came following the meeting held upon high instructions of HM King Mohammed VI between the sovereign’s advisors, Abdelatif Mennouni and Omar Kabbaj, and Benkirane.

During this meeting, the Sovereign’s advisers informed Benkirane of HM the King’s concern to see the new government formed as soon as possible.

During these talks, the Sovereign’s advisers informed Benkirane of the expectations of HM the King and all Moroccans regarding the formation of the new government.