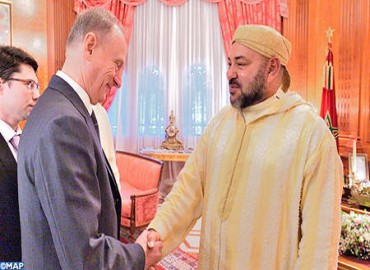 HM King Mohammed VI received, on Friday at the royal palace in Casablanca, Russian Security Council Secretary, Nikolaï Patrouchev, who is on a working visit to Morocco, a statement by the Royal office said.

The royal audience is part of the enhanced strategic partnership, sealed in Moscow at the meeting between the Sovereign and His Excellency President Vladimir Putin.

On this occasion, HM the King reiterated His determination to work, hand in hand, with His Excellency the Russian President in order to strengthen and deepen strategic cooperation in all fields.

The visit of the Secretary of the Russian Security Council to Morocco confirms the depth of security cooperation between the two countries.

During this meeting, the Sovereign extended an invitation to President Vladimir Putin to pay a state visit to the Kingdom of Morocco.