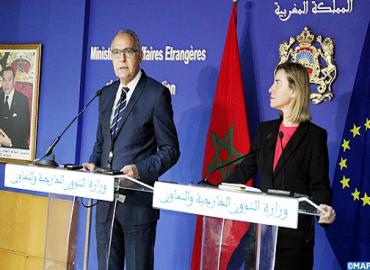 “The EU remains convinced that agreements with Morocco do not violate international laws,” Mogherini told the press following her talks with Minister of Foreign Affairs and Cooperation Salaheddine Mezouar, adding that for this reason “an appeal has been lodged at the European Court of Justice against December 10, 2015 ruling” on the Morocco-EU agriculture agreement.

Mogherini said she is “aware of the strategic importance” of this issue for Morocco and EU, noting that the European Council “disagrees” with the court ruling.

She said that she has provided the necessary clarifications and assurances during her talks with Moroccan authorities, adding that EU and Morocco will work as genuine partners on this issue.

To this end, regular, continuous and transparent interaction and dialogue will be conducted, she underlined, adding that Minister Delegate to the Minister of Foreign Affairs and Cooperation will visit Brussels before the end of this month to finalize the content of this interaction with the European side.

“It seriously jeopardizes cooperation between Morocco and the European Union. It must be corrected”, Mezouar told the press following his talks with High Representative of the European Union for Foreign Affairs and Security Policy Federica Mogherini.

“It is a highly strategic issue”, he stressed, adding that “it is not an ordinary judicial issue, but a fundamental element in the continuation of our partnership”.

Mezouar deemed the talks with Mogherini, who is on visit to Morocco following the kingdom’s decision on Feb. 25 to suspend its contact with the EU, except for exchanges on the appeal related to the EU-Morocco Agriculture Agreement, as “frank, constructive and inclusive”.

The Moroccan Minister noted that the EU High Representative reaffirmed to her Moroccan partner that the “European Council will take all the necessary measures at the European Court of Justice to annul the first instance decision on December 10, 2015”.

“Morocco has taken note of EU guarantees that the agriculture agreement between the two sides will remain in place, and that the European Union will respect its international commitments with Morocco”.

For her part, Mogherini stressed that Morocco-EU agreements “do not violate international law”.

She also said that she is “aware of the strategic importance” of this issue for Morocco and EU, noting that the European Council “disagrees” with the court ruling.