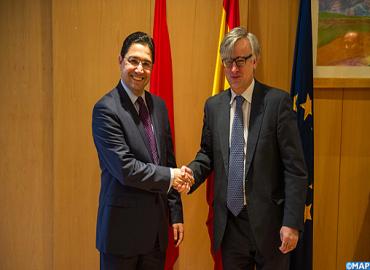 Minister-Delegate to the Minister of Foreign Affairs and Cooperation Nasser Bourita held talks here on Thursday with the Spanish Secretary of State for Foreign Affairs, Ignacio Ybanez.

Talks focused on bilateral relations and the means to promote cooperation between the two countries in various fields.

The Spanish Secretary of State hailed the excellent bilateral relations, particularly in the area of the fight against terrorism, stressing the need for both countries to further strengthen them.

For his part, Bourita stressed that Morocco and Spain share the same vision on several regional and international issues, hailing the excellent political partnership and mutual trust between the two countries.

The Minister said that Spain is now the main partner of Morocco at various levels, adding that the recent launching of a new development model in Laayoune as well as a new investment program in Morocco’s southern provinces, for $ 10 billion, provides enormous opportunities for Spanish companies.

Morocco’s action at the multilateral level for 2016 will be conducted in a comprehensive framework, and will cover the fight against terrorism, environmental protection and migration, Bourita said, reiterating Morocco’s commitment to continue its efforts within the various existing working groups.