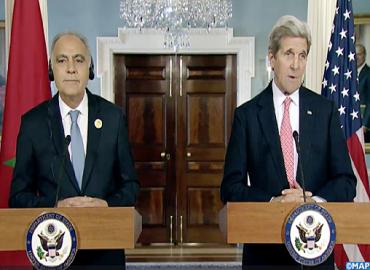 Morocco FM Holds Talks with US Secretary of State in Washington

Minister of Foreign Affairs and Cooperation Salaheddine Mezouar held, here Thursday, talks with US Secretary of State John Kerry on the means to promote the “excellent” cooperation relations between Morocco and the United States.

The summit meeting at the White House between HM King Mohammed VI and President Barack Obama in November 2013 has given strong impetus to the momentum of cooperation between the two countries, Mezouar told the press on this occasion.

He noted that Morocco and the United States, two friendly countries, “share the “same values and the same beliefs” for peace, stability, prosperity and democracy.

The Moroccan diplomat also said that the Moroccan-US relations, which stand out for their “serious” character “move forward in a structured framework”, as evidenced by the strategic dialogue established in 2012 and is a “model in its formula and ambitions” for cooperation.

In this context, Mezouar hailed the “perfect” cooperation between Washington and Rabat, especially in terms of security, counterterrorism and eradication of factors that constitute the foundations of the terrorist threat, adding that both countries are convinced that “the world cannot move forward except within the framework of peace, stability and prosperity”.

The Minister of Foreign Affairs and Cooperation praised the efforts made by the United States at the United Nations Framework Conference on Climate Change (COP21) in Paris, which resulted in a historic agreement.

He also stressed the importance of the US support for the success of the COP22, which will be held on November 7-18 in Marrakech, noting that after the Paris Agreement, the world “awaits the implementation of concrete projects” in the fight against global warming.

Morocco, which was the first nation to recognize the United States of America after the Declaration of Independence, is a “very important ally” of Washington, US Secretary of State John Kerry said Thursday.

“Morocco was the first nation to recognize the United States after the Declaration of Independence”, US Secretary of State told the press before his meeting with Foreign Minister Salaheddine Mezouar, adding that Washington has since had “long-standing relations with the Kingdom”.

Recalling that Morocco is an important non-NATO ally of the United States, Kerry underlined that the Kingdom is also “a partner (of Washington) in the fight against terrorism and the efforts aimed at promoting stability in the region in general”.

In this respect, the US Secretary of State noted that the kingdom “is now deeply committed to finding a solution to the Libyan crisis”, expressing the “gratitude” of the Obama administration towards Morocco, under the leadership of HM King Mohammed VI, for His initiative to host the inter-Libyan dialogue.

Kerry also said that his talks with Mezouar will address many issues, notably the Sahara issue and “our common commitment” vis-à-vis the issue of climate change.

“We look forward to seeing the contribution of Morocco in this area”, US Secretary of State stressed.

USA-Morocco Strategic Dialogue, a Framework for Promoting Partnership and Dynamic Relations Between Washington and Rabat (minister)

The strategic dialogue between the United States and Morocco provides a framework that enables both countries promote partnerships so that relations between Washington and Rabat remain always “dynamic”, Morocco’s Minister of Foreign Affairs and cooperation, Salaheddine Mezouar, said here on Thursday.

Mezouar told MAP, following talks with the US Secretary of State John Kerry, that the meeting was an opportunity to take stock of the current state of relations between the two countries and to highlight the importance of the summit meeting at the White House between HM King Mohammed VI and President Barack Obama, at the end of which a roadmap was developed with commitments from both sides.

“We agreed to meet early next April” in Rabat for the 4th session of the Strategic Dialogue, he said, highlighting the “mutual trust” and “positive spirit” that drive Rabat and Washington as well as the recognition by the US of the role played by Morocco as a “stabilizing factor in the region.”

The minister said that the US laud the role played by the Kingdom in particular in the fields of radicalization, training of imams, human development, food security and energy.

Talks focused also on the COP22 which will be held in Marrakech in November, he added, noting that Kerry said that the United States will work to ensure a successful implementation of the Paris agreement and support the process led by Morocco.

Mezouar also said that he discussed with Kerry the latest developments of the Sahara issue and the new development programs implemented in Morocco’s southern provinces.

“We stressed the need to preserve the spirit of dialogue and consultation, while insisting that the Secretary General of the United Nations must also fulfill his responsibilities and ensure that there is no slippage in the process” ongoing, he said.

Mezouar also said that his talks with Kerry were also an opportunity to take stock of the situation in Libya and commend the “extremely important” role played by Morocco in the political dialogue conducted between different factions.

The minister also had talks with the US Assistant Secretary of State for African Affairs, Linda Thomas-Greenfield, which focused on the situation in the continent.