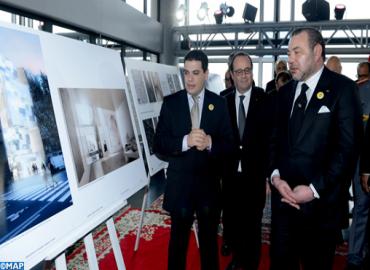 This visit was an opportunity to present to the Sovereign and the French President, the project of the Moroccan Cultural Center, which will be built soon in Paris.

The cultural center will showcase the Moroccan culture in its diversity. It will contribute in promoting the heritage and traditions of the Kingdom, and highlighting the contemporary Moroccan art scene in a spirit of partnership with Moroccan and French cultural institutions.

The Moroccan cultural center in Paris will also contribute in strengthening ties between the Moroccan community living in France and their native country.

This center, which will be built on a plot of 320 square meters, is designed with a contemporary architecture, in line with the ambition to be a meeting place between cultures.

The project, which will require a budget of 7 million euros, will be completed with 24 months.

HM the King and the French President also chaired, at the Arab World Institute headquarters, the signing ceremony of an agreement between the Directorate of Royal Archives and the Museum of the Order of the Liberation to organize, in October in the Invalides, an exhibition on Morocco, on the occasion of the celebration of the sixtieth anniversary of Independence.

After successful exhibitions on “Medieval Morocco” and “Contemporary Morocco”, this event will be another opportunity to illustrate the unique relations between France and Morocco, which were forged throughout a rich shared history and the development projects launched by the Kingdom.

Thereafter, the Sovereign visited the exhibition dedicated to the “legend of Osiris” which exhibits over 250 unpublished works and world heritage works which were buried in the waters since antiquity, as well as forty works from the museums in Cairo and Alexandria.

HM the King Holds Talks with French President in Paris

Morocco FM Holds Talks with US Secretary of State in Washington