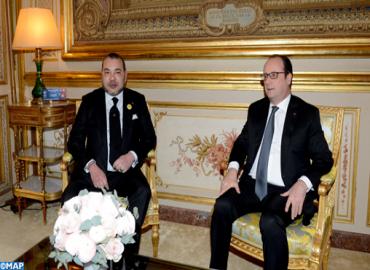 HM the King Holds Talks with French President in Paris

HM King Mohammed VI held, Wednesday at the Elysee Palace in Paris, talks with French president François Hollande, expanded later to the Ministers of Foreign Affairs and Environment of both countries, the Advisors of the two heads of State and the respective ambassadors, HM the King’s Office said in a statement.

The French President thanked HM the King for His personal commitment in the success of COP21. In the spirit of Tangier Call of 20 September 2015 and in order to develop a strong and solidarity-based action for climate, the two Heads of States gave their high instructions to design a joint road map to maintain mobilization, reinforce coordination with the aim to ensure the ratification of all member States of the Paris agreement and guarantee the success of COP22, scheduled on November 7-18 in Marrakech.

The French President hailed the crucial role of Morocco in the process held under the auspices of the United Nations to reach the Skhirat Agreement to form a national unity government in Libya.

The two heads of State called on the Libyan House of Representatives to quickly approve the new government so as to address the many challenges facing Libya and the broader region.

Bilaterally, the two heads of State hailed the good progress of projects undertaken notably in economic and cultural fields. They also hailed the close cooperation in the fight against terrorism and transnational crime, and examined new cooperation perspectives, especially in the fields of security, de-radicalization, culture, co-existence and triangular cooperation in Africa.

The Sovereign and French President noted with satisfaction the new impetus that drives the relationship between the two countries and reaffirmed their determination to continue their cooperation, in particular through strengthening regular cooperation mechanisms, so as to further place relations between Morocco and France under the seal of durability and excellence.

After the talks, the Sovereign and the French President visited the Institute of the Arab World, where they followed a presentation about the project of the future Moroccan Cultural Centre in Paris.