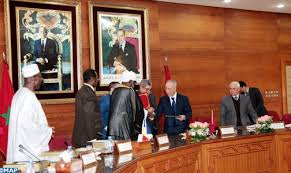 The Kingdom of Morocco and the Republic of Chad signed, Tuesday in Rabat, an Islamic cooperation agreement and an agreement on the training of imams.

In a press statement, the Minister of Endowments and Islamic Affairs, Ahmed Tawfiq, said that the two texts, signed by his department and the Higher Council for Islamic Affairs of Chad, “mark a new beginning of cooperation linking the kingdom with several African countries in matters of religion. ”

Commenting on certain aspects of the Moroccan-Chadian cooperation, Mr. Tawfiq recalled the construction of a cultural center and a mosque in N’Djamena on High Majesty King Mohammed VI instructions, in addition to joining the Foundation Mohammed VI of African Ulema.

“After approval by the Sovereign, the Kingdom will contribute, within the framework of this cooperation, the training of 200 Chadian imams for short periods of 3 to 4 months, according to a special program of the Institute Mohammed VI of training imams , morchidines and morchidates “added the Minister.

In a similar statement, the chairman of the Supreme Council for Islamic Affairs of Chad, Hussein Hassan Abakar, praised the Moroccan experience in the management of religious thing, expressing his country’s ambition to benefit.

He added that “the Mohammed VI Foundation for African Ulema plays leading roles, to strengthen the links between the ulema of the continent,” stressing that the institution helps to counteract the risks arising from the misinterpretation of Islam .

The Moroccan-Chadian cooperation in religious matters is governed by a protocol signed between the Ministry of Endowments and Islamic Affairs and the Higher Council of Chad Islamic Affairs, dated 28 November 1997, as well as a meeting between officials Ministry and the Council signed on 23 March 2007 in Rabat. Why Did Islamic State (Daesh) Launch Virulent Media Campaign against Morocco, Others?